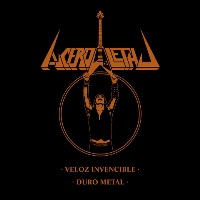 "Veloz Invencible / Duro Metal" is the second release in seven years from lazy Chileans Acero Letal (and the other one was a two track single too). Perhaps these guys are fans of the ‘slow build’, but I can’t see them gaining much momentum at the present rate. Oh well.
Track one ‘Veloz Invencible’ is classic speed metal the way it should be played. If they guys could put out an album of this quality, they could count me among their fans any day.
Things slow down a bit for ‘Duro Metal’ which while still embracing the speed metal ethos, is a bit tamer (Exciter springs to mind). Not as good as the first track, and certainly not fantastic if you consider that Acero Letal weren’t trying to keep the quality together for a full album, but only for two tracks.
Still, this is worth checking out if speed metal is your thing. I hope the guys can get an album together soon and live up to the promise of ‘Veloz Invencible.’