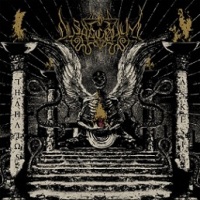 I really enjoyed 2014’s 3 track tape demo from German black metal quartet Dysangelium (not to be confused with a band of the same name from the Czech Rebublic), so was looking forward to seeing how quality fared on a longer outing.
In terms of sound, things are still the same; modern black metal focussing on tracks that are fast, tight and memorable, with a balanced, modern production. Unfortunately, the songs don’t deliver as they did on the previous release. Everything is GOOD, nothing is BAD, but is that really enough? If a band is going to go straight down the middle and deliver a relatively conservative sounding release, then the songs have to be top notch, since they can’t rely on atmosphere or their own insanity to carry things across. And that is what Dysangelium have failed to do here.
Having said that, ‘Thánatos Áskesis’ has some very cool moments, just that they are too few and too far between. And that the three best songs on offer here were the entirety of ‘Leviaxxis.’ So the potential seen in 2014 is still there – just not properly capitalised here.