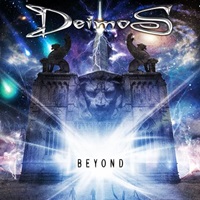 Starting out as a Gamma Ray tribute act before writing their own original material, Italy’s Deimos has a little of that German power sound in their debut album "Beyond" for certain. Differentiating themselves from the norm is drummer Massimo Goletti, who performs more of a progressive shuffle style amidst his double bass and standard metal abilities. Singer Andrea Serafini plows his way through these tracks with semi-accented flair, well equipped to navigate the killer high falsettos one expects in the style and reminding me of Michele Luppi (Secret Sphere, ex-Vision Divine) on "D.M.V." and the shape shifter "Run or Die!".

At 12 tracks and 65 minutes, Deimos could use a little more self-editing practices as certain modern squeals or instrumental segments need tightening of the belts to keep the arrangements moving along. In the end, the guitar work from Luca Gabrieli and Federico Lanterna wails and astounds, be it from a purely instrumental perspective on the outer worldly "Collapsing Core" or during a faster, more aggressive number such as the 90’s era Megadeth-like number "Dark Times". Guests include Trans-Siberian Orchestra/ ex-Savatage guitarist Chris Caffery on "The Three Storms", Extrema guitarist Tommy Massara, and female vocalist Paola Gemma who appears on the epic ballad "Locked Heart", the only song to make it from their previous "TerminUs" EP of 2012.

Straddling the lines of old school power metal and the European sides, along with 90’s era acts such as Metallica or Megadeth when they took the accelerator down the riff/ tempo train and polished up their sound, "Beyond" showcases an act that is professional and delivers dynamic performances. I’d be curious to watch the development of this group.