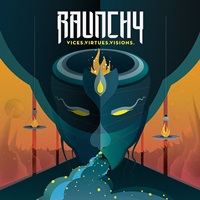 The sixth album for this Danish sextet, it’s obvious to those who have followed Raunchy’s career arc that their sound has transformed from its early roots to current incarnation. If you own the early Nuclear Blast albums "Velvet Noise" and "Confusion Bay", they definitely came from more of a modern thrash/ groove background in line with say Mercenary or possibly Soilwork – but now fully embrace their pop and cyber/dance/synth-oriented tendencies which may have your ears abuzz as the heavier elements slide away.

When you have a band that has two distinct vocalists for clean and extreme parts, plus two musicians who can play keyboards and guitars, the opportunities are endless for sonic exploration. It can mean the synth parts take the lead in terms of starting and maintaining the hook while the guitars fill in the gaps on "Eyes of a Storm", or aiding in the building of an explosive melo-death movement such as the follow up "Truth Taker" (where the transition is very power pop and serene vocally). The swirling, in and out electro dance passages for "The Castaway Crown" are similar to the bounce one expects from future superstars Amaranthe, as drummer Morten Toft Hansen moves between speedy double bass kicks and solid in the pocket percussion parts to propel the energy of said track.

The second half of the album contains tracks of a lengthier variety, often allowing guitarist/ keyboardist Jesper Tilsted and guitarist Lars Christensen ample opportunity to color the arrangement in hues of light, dark, and contrasting emotions. Check out "I, Avarice" and "Clarity" as two examples, the latter having a lot of beautiful interplay moments between bassist Jesper Kvist and his fellow guitarists/keyboard players – from uplifting at the 4:01-4:26 section to intense half-time heaviness in the concluding 30 seconds. Normally 63 minute albums don’t sit well to my fast paced, multi-tasking lifestyle, but "Vices.Virtues.Visions." has a great flow from first song to last which keeps me coming back for more and deeper listening sessions.

If you can handle the fact that Raunchy 2014 is a multi-faceted act that embraces their pop and keyboard hooks as much as their groove and melodic thrash/death aspects, then you’ll love this.