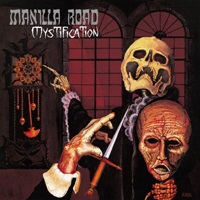 Years ago I remember purchasing this album when Sentinel Steel Records saw fit to give this the repackaging, remixing, and re-issuing treatment. Once again the buzz about this epic heavy metal is resonating around the globe, their live performances legendary as is much of their material for decades. The sixth album from Kansas’ Manilla Road, "Mystification" features 9 tracks of primal heavy metal, Mark Shelton’s one of a kind eerie hypnotic voice soothing against the adventurous riffs and pummeling rhythm section.

Back in 1987, I can understand why Manilla Road only received modest response in the community at large. Songs such as "Valley of Unrest" and the galloping "Children of the Night" contain fluid instrumental passages that require intense listening sessions, as the parts build and build into these peaks and valleys that are slightly progressive, very moody, and assuredly left of conventional thought. Intertwining acts of the 70’s and 80’s into their own special sound – as if early Fates Warning met the NWOBHM and power/thrash- was one of Manilla Road’s specialties beyond their take on stories such as Edgar Allan Poe’s infamous "Masque of the Red Death" or H.P Lovecraft with the aforementioned "Children of the Night".

Randy Foxe had a way on the drums to key in on the right tempo choices – doomy when need be, thrash-level at other times, and his fills would be total horns up efforts. Scott Park on bass didn’t lay back either – equally important to give his bottom end input that thick, dark tone to make "Death by the Hammer" and the title track long time winners. And who can forget Mark’s dual vocal/ guitar importance – endearing, everlasting, bringing tears to many a fan through the years.

Manilla Road = epic metal 101. Do not let their legacy vanish.