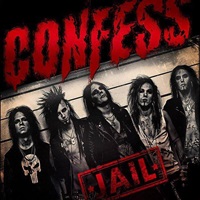 Put another log on the Swedish sleaze metal fire in Confess. On their debut album "Jail", you’ll get 12 original compositions and their interpretation of the Tina Turner 80’s classic "What’s Love Got To Do With It" that live for guitar hooks, large choruses, and that late 80’s glam swagger. Crashdiet and Hardcore Superstar are two acts that beckon when taking in radio friendly anthem "Scream" and heavier, street leveling "Bloodstained Highway".

John Elliot has that necessary snarly delivery and charm to be the prime front man for Confess, nasty in "Back to Hell" while tender on the semi-acoustic ballad "Take Aim" that should get the swooning females in a romantic mood. The 7:53 "Intervention (Sin & Tonic Pt. 2)" has a lot of those traditional twin guitar harmony elements from Denver and Blomman and dramatic musical twists (calm to bright) that prove the band know how to perform beyond normal 3 chord arrangements.

The worst moment on "Jail" is the Tina Turner cover, I applaud the outside the box choice but I just think the arrangement with keyboard twinkling and echoing guitar refrain brings down the soulful nature that made the original a worldwide pop smash hit. The band plastered on the album cover as if taking a lineup photo for a crime tells you much of what you need to know of the inside contents.

This particular scene shows no signs of slowing down- and given the access to the classics at your fingertips, this resurrection of good time hard rock/ sleaze metal benefits all into this style. Confess could make the cut from the new generation as a result.