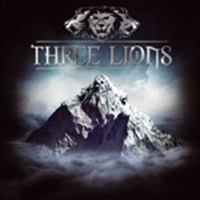 This trio consists of members who’ve been involved in the UK rock scene for some time. Guitarist Vinny Burns has ties to Dare, Asia, and Ten; drummer Greg Morgan also played with Vinny in Dare and Ten – while bassist/ vocalist Nigel Bailey is a relative newcomer. Gaining the good fortune of stellar production and composing help (on 2 tracks) from Italian producer/ musician Alessandro Del Vecchio, the self-titled debut is a 13 song collection that is very straightforward, melodic hard rock in a fine, rich AOR traditional mold.

Nigel’s melodic range has a lot of the spirit of Gary Moore, John Wetton, and John Waite running through his tender touch- check out the guitar harmony heavy "Twisted Soul" or the slower, slightly gospel influenced "Two Hearts Beat As One" to know he will be in contention for melodic rock singer of the year. Musically Three Lions has a majestic template – not unfamiliar to those who know Ten – and yet the songwriting has that AOR sheen and clarity makes you move emotionally as well as physically. Highlights include the epic grower "Kathmandu", the Night Ranger-oriented "Hold Me Down", and straight ahead hard rocker "Hellfire Highway". And expect guitar breaks from Vinny that aren’t self-serving but complementary to each individual song – he certainly has a lot of tools to display, yet never oversteps the boundaries. Again coming from a school of players like Gary Moore, Michael Schenker, and the late-70’s to mid-80’s mold (check out the instrumental closer "Sicilian Kiss"- breathtaking in a ballad tempo format).

Frontiers really are the leaders of this genre in terms of pairing the right musicians and songwriting to deliver high quality outcomes. Three Lions will be a name we hear a lot of in the melodic hard rock genre for years to come- get in on the ground floor now through their debut.