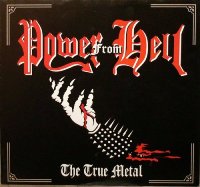 ‘The True Metal’ was the debut from Brazilian black thrashers Power From Hell, originally released in 2004. This version is a vinyl only re-release, limited to 666 copies.

You ‘d probably guess from the cover but this disc features some hardcore Bathory Worship, channelling the same kind of punked up-anti Christian vibe that drew us all to the Swedish legends back in their very earliest days. Snarling vocals, driving, head smashing beats and simplistic but effective riffs to summon forth the evil in man all recall a youthful Quorthon. Which is fine with me, as I’ve been a fan since the 80’s.

The production is uber low fi, as if recorded in a shed on the edge of Hades. Seriously – this is just about demo quality. But that’s not a bad thing either, because PFH are about raw energy and that is what the sound of this disc brings.
Not an absolute must have release but great fun and I hope the guys at Negative and Duplicate seriously consider releasing some more material from this act.