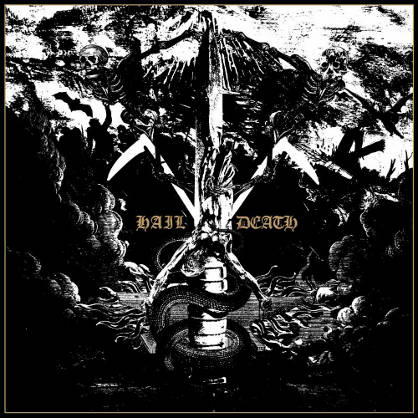 Black Anvil hails (pun intended) from New York and "Hail Death" is their third opus since birth back in 2007. Musically we´re talking blackened death metal with some thrash incluences spread all over and personally I enjoy some of it. The tempo and intensity is right where it´s supposed to be but the vocal sounds (in my humble opinion) too much core for my personal taste. A hybrid between In Flames and some deathcore band (I dont know many) and even though the long shrieks works out well, the general flow of the vocal just dont fit.

Production wise "Hail Death" it´s polished and sweet and even though I think this kind of extreme metal should be a little "myddy" and raw the general vibe I get from the album is nice and heavy. The material is (as mentioned) somewhere between melodic death metal and black metal but the songwriting is on par.

Black Anvils third full-length is good enough to check out but after a couple of spins I need a break.

If you know Black Anvils earlier releases I´am sure you´ll like "Hail Death".