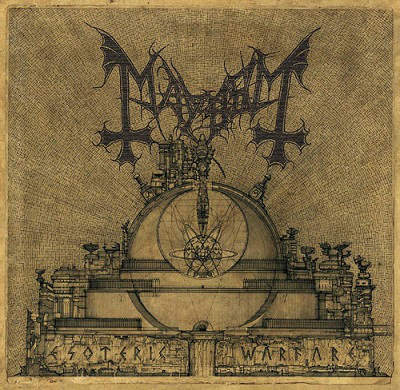 Mayhem have done it again. Rewriting the rule book on Black metal once again.
This time in the form of "Esoteric Warfare", their sixth album overall and first in seven years since "Ordo Ad Chao" from 2007.
Mayhem should need no introduction if you read this review so let´s go straight to the music on the formidable "Esoteric Warfare".

First, Attila is in prime shape once again. His vocal style still have the elements of surprise and he sounds both evil and angry as hell. Perfect for the music Hellhammer keeps steady as a rock. His abilities as a drummer is well known and he proves once again why he´s considered such. The tempo changes rolls from harmonic to relentless perfectly and all the variation creates an unique atmosphere.

And just atmosphere is one thing "Esoteric Warfare" delivers on all accounts. This is no blastbeat mayhem (pun intended), this is beautifull black music that drags you out and beats you up for so let you take a short breather before it´s on again.

Not an easy listening the first couple of times, but after a couple of spins it really sets in and works it´s magic.

Soundwise the production is top notch. The old-school dark necro fuzz is layered just clear enough so all instruments are audioable and enjoyable (oops, did I say that?).

"Esoteric Warfare" is just an remarkable recording consisting of 10 intelligent but crushing modern black metal tracks all performed with such intensity that after a couple of spins I needed a break.