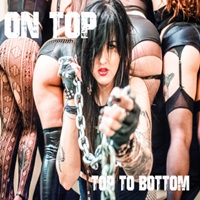 A Philadelphia, PA power trio, On Top return to the scene with a 4 song EP "Top to Bottom". Tight as a whip in terms of the songwriting and performances, this is a good time hard rock release filled to the brim with gang-oriented sing-a-long choruses, guitar hooks and harmonies, and easily addictive grooves. These songs seem to have as much to do with Skid Row and early Ratt as they do Loudness and Queensryche – all four are killer but I seem to return a lot to "Cold and Blue" and the bass fueled "Don’t Go".

New lead guitarist Brian Davis fires off some heroic bursts, taps, and fury on the closing 6:21 "Bad Love" – giving bassist/ vocalist Jaron Gulino and drummer Danny Piselli plenty of time to jam on the main riff. On Top prefer in your face, natural sounds emanating from their guitars, bass, drums, and vocals – so do not expect slick production values but a sound akin to what I would imagine they would be like in a live setting.

The cover art may have you thinking it’s more Poison and Mötley Crüe oriented, but "Top to Bottom" is solid stripped down hard rock with metal leanings, and the sarcastic meets shouted vocal delivery from Jaron makes it that much more explosive. Another great release, on par to their "Top Heavy" debut album and I expect this will go over very favorably for their developing fanbase.