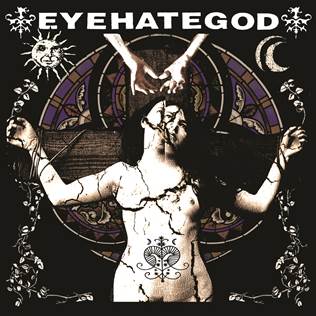 I have been waiting patiently for this new, self-titled album by the gods of ugly and crushing southern sludge metal, namely the legendary EYEHATEGOD. Does it live up to my expectations? The answer is a resounding YES! The album contains 11 awesome tunes that will appeal to all you sick, twisted, and depressed fucks out there. As a whole, the album is intense, organic, and dynamic, and all the EHG trademarks are present. The riffs are somewhat simple and memorable and yet strangely dissonant at times. The vocals, courtesy of Mike Williams, sound better and more potent than ever. The band is tight, the songs are well written and cohesive, and there is a lot of atmosphere to this record. The screeching guitar feedback and the somewhat unsettling vibe present in and around EHG is totally there and intact. I am not going to analyze and dissect every song off the album, but let me just point out that I consider "Worthless Rescue" and "Medicine Noose" some of the best damn songs ever written by the band, period.

Obviously, EYEHATEGOD is not for everybody and it has always been that way. Chances are that fans of the band and sludge metal in general will love and cherish this album, which is cool, but all you moody suckers out there who may not be familiar with the band ought to give this record a chance. Just keep in mind that you have to listen to it a whole number of times before everything really starts to sink in. Personally, I love this album and consider it one of their very best and most appealing ones to date (…hmmm, using the word appealing in relation to the ugly and depressing music of EHG is somewhat weird, but I digress…).