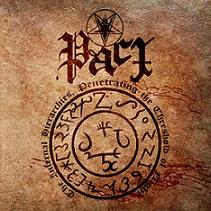 PACT – The Infernal Hierarchies, Penetrating the Threshold of Night

Back in 2012, I gave the first Pact full-length one of only perhaps 3 full mark sixes I’ve ever handed out. I was impressed by the brutal, occult assault perpetrated by the US trio. I loved the cold, otherworldly rawness they managed to infuse their music with. Even more, I loved the demonic intensity with which they play. Pact on ‘Dragon Lineage…’ sound possessed, and the whole record has an off-kilter vibe that made it feel as if the vinyl was going to suddenly burst into flames and fly off the turntable to imbed itself in your forehead.

Two years later and the approach is still the same – dissonant open string picking, blasting beats like a hail of bullets, pounding bass lines and chords that evoke a hell-storm of infernal rage. On the one hand, we can laud Pact’s single-mindedness in ploughing the same furrow as they did previously. This time around though, many of us have heard it before, so the attack is expected and the effect lessened. Also, the production is much beefier and more professional than before. This might appeal to the majority of listeners, but unfortunately the tinny, madness-inducing quality that made the debut so potent has been lost.

Still, the more I listen, the more I find to like and as time passes, ‘Infernal Hierarchies…’ is becoming a more and more attractive proposition. I have a feeling the appeal is set to grow…