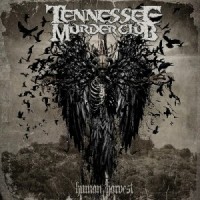 We can forgive you if you’ve never heard of TMC before – this Dakota Death Metal act has kept a relatively low profile since its inception in 2009. But perhaps with a little luck and their second full-length release things might be set to change…
‘Human Harvest’ is death metal played straight down the middle – not too brutal or technical and with plenty of catchy riffs crunching breakdowns. It feels as if this record was made with the same ideals that drove the creators of the first death metal – to invoke a sound a world of horror and murder. That goal seems to have been diluted nowadays as bands take their influences from what came before, rather than that one source idea.

The presence of guest artists like Jack Owen, Steve Tucker, Mike Flores and Shaune Kelley demonstrates that TMC have some cred at least among their peers in the pantheon of American Death Metal. Most importantly though, is the fact that ‘Human Harvest’ impresses through its own merits – because the songs are great, the DM atmosphere is authentic and because the further one gets into this record the more it surprises. Maturity, compositional awareness, production values, ability to create a groove and to smash it up when necessary – all of these good things are on offer here.