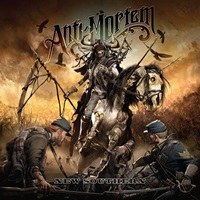 Raised on southern rock and heavy metal, Oklahoma’s Anti-Mortem are a young bunch of musicians as the average age is at the legal United States drinking age of 21. 4 years in, the quintet gain a new deal under the Nuclear Blast Entertainment sub-label for their debut album "New Southern". The 12 songs sit in a swirling pot of modern hard rock familiarity: hooks both musically and vocally that either go immediate or go home, simplified rhythms and grooves, and basic melodies that do not make you think beyond three chord madness.

The southern sludge factor comes in for the lower tuned squeals and bounce element, check out "I Get Along with the Devil" and "100% Pure American Rage" for that C.O.C. meets Pantera in Mudvayne alley montage. The snappy open snare can be irritating for some, loved by others – while lyrically and vocally Larado Romo comes across as a touch sassy and bad ass, occasionally venting in curse word fashion during worked up verses of "Path to Pain" but a little more commercial oriented a la Theory of a Deadman or Corrosion of Conformity during the swampy title cut or percussive groove-fest "Truck Stop Special".

Not original in the slightest, I’m sure Anti-Mortem will gain its fervent share of consumers who just want to drink their beer, raise their fist from time to time, and relate to blue collar frustration and lifestyle angst. For my broad tastes, "New Southern" doesn’t cut the mustard, and will probably appeal most to those teens and twenty-somethings who prefer to be force feed their music collection needs by the masses rather than thinking or seeking out true, sincere, creative metal.