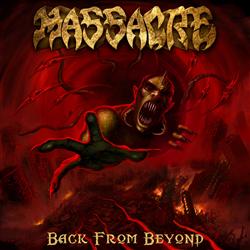 MASSACRE – Back from Beyond

The mighty Massacre are back and all the childeren are excited.

US quartet Massacre released one of my (and I guess every death head around) favorite death metal albums back in 1991 "From Beyond".

The now legendary release sat the bar high for groovy Florida death metal back then and the album still holds the test of time. The follow up EP, "Inhuman Condiditon" also kept the high watermark in check before Massacre released the massive disappointment "Promise" in 1996 that silenced the band for almost 20 years.

There has been alot of talk on the World Wide Web about Massacre return. Will they be able to manage something like "From Beyond" once more, who will replace original vocalist Kam Lee (of early Death fame) and so on..
The result, aptly named "Back from Beyond" is somewhat a bag of mixed feelings.
Their brand of old-school DM with a modern touch of brutality did not get under my skin right away but after a couple of listens the albums grows considerably.
Rick Rozz, original member and riffmaestro keeps the songs relatively easy to listen to with good melodies kept mid-pace and added solo´s where appropriate.
Bassist Terry Butler is also doing his part. The bass is fairly prominent in the mix and his licks does a formidable job on both keeping company with the guitar riff and addings some intricate lines beneath the driving rhythm.

The percussion is kept simple but effective. They sound great in the mix but is secondary to the guitar. There´s a couple of cool breaks and fills but nothing that´s worth writing to grandma about.

My main obstacle with "Back from Beyond" is the vocal. Edwin Webb does a pretty good growl but it´s not Massacre (or Kam Lee for that matter). I know and understand that he should of course get his own signature on the overall Massacre sound but it sounds just too modern and polished. The overall flow is good, he´s not too deep in the cookie jar but the strained brutality gets a little exhausting after a while. His high pig squeals is also something I was not ready to associate Massacre with.

In summary, Massacre delivers a good but not great death metal album (no, it´s no "From Beyond", that I am sure will get a lot more attention just because of the cult name. I like it and it will be played massively in the time to come, just to honor the legendary act and their mighty logo.

Massacre is the definition of early US death metal and their legacy will forever be carved in the hearts of yours truly.