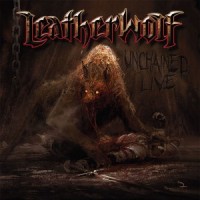 One of my favourite releases from the mid 80’s was Leatherwolf’s self titled full-length debut. It is one of the only records from that era that I still return to regularly. When the follow up ‘Leatherwolf II’ can along, I felt it was a little soft for my tastes. It lacked the attack and NWOBHM influence of its predecessor and it seemed the band were moving to more pastures more glam. And so I have largely stayed away from new releases from the band until ‘Unchained Live’ popped up in my inbox.

In terms of contents, we have 2 off the first album, ‘Hideaway’, and then a few off the second and third efforts and ‘Dr. Wicked’ off both ‘World Asylum albums’ (long story). And right there we have a full point docked. I have already said my interest was predominantly the early stuff. Why no ‘Season of the Witch’? Why not finish up with the Dear Roberts fuelled intensity of ‘Leatherwolf’?

On the plus side, singer Mike Olivieri is in great voice and the triple axe attack is as sharp as ever. Hearing the songs played live and sharing the same production enables the listener to see how closely related they all are. Yes, the later material is softer, but the catchy choruses and cool riffs just can’t be ignored. Check out ‘The Calling’ or ‘Rise and Fall’ for example.

If you like melodic metal with a bitof power and some tasty guitar work, this is for you.