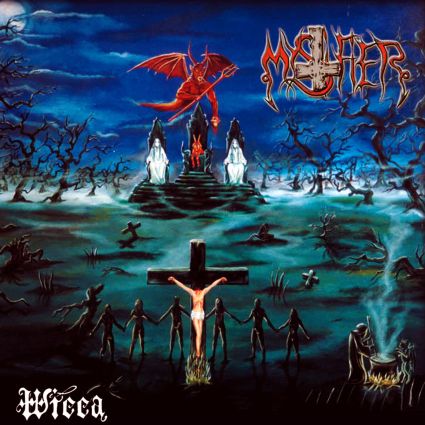 Mystifier (Brazil) have delivered unholy black metal since 1989 and their debut "Wicca" from 1992 is getting the re-release treatment. The production is much clearer than the original and to some this is great, to others this is usually not acceptable because it alters the allover feeling of the album. Personally I don´t like it because as mentioned it alters the history of a release.

Mystifier should not be unknown to the casual black metaller and even though they made better releases in the fourth comming years, "Wicca" still is one hell of a debut and it still holds down even some 22 years later.

The music is mid paced based much around a riff that then explodes into a blastbeat session with whispered grunts to accompany it. The atmosphere is also upped a notche with haunting and eerie keyboard parts.

The south american black metal formula they where a part of creating together with Sarcofago and early Sepultura.

An example is the brilliant song Defloration, full speed on the drums, fuzzy riff that let´s the bass lines run the pace with a reverbed vocal on top. Evil as it gets.

"Wicca" deserves to get introduced to new listeners so this re-release is justified to give Mystifier more praise than they mabye have gotten during their 25 years of existence.

Mystifier is attending this year´s Inferno Festival in Oslo and I for one is looking forward to seeing them live for the first time.