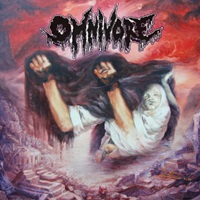 There’s nothing wrong with hearing a death/thrash act from Italy who live for speed and well played transitions- and that’s what you’ll get from Italy’s Omnivore on their self-titled debut album. Remember the days of late 80’s/ early 90’s Sadus, Massacra, and Merciless- along with the Bay Area gang chorus vocals? That’s what you’ll get (and a little more) from this punishing 32 minute effort. Even when the band decide to modulate their tempo into something pit-worthy (such as the middle sections of the 6:39 "Nothing More Than Dust" or early segments of the triplet-heavy "Trust") there’s a schooled sense of technical prowess that impresses me.

Vocalist / guitarist Pol has a death rasp that manages to spit out the lyrics at the same bullet train pace as the music- and you’ll get as punishing a bass sound from Giona as expected, forming a sonic blitzkrieg that will be hard not to bowl everyone over. Favorites include the stair step dynamic "Hypochrist" that should appease those into Bay Area thrash and their ferocious cover of Sepultura’s "Arise" – playing it pretty much at the speed I remember the band performing it live back in their heydays.

Omnivore would be the first to admit that their sound is not original- but you don’t hear many bands these days willing to tackle this speed thrash/death style. If there was one disappointment, it would be in the double bass sound as it appears to be highly triggered and I prefer a natural tact even if it means the sense of human imperfection. Overall, this is ideal for those who want an adrenaline rush with no sense of commercialism in sight.