THE COMMITTEE – Power Through Unity

THE COMMITTEE: Track-by-Track about "Power Through Unity". 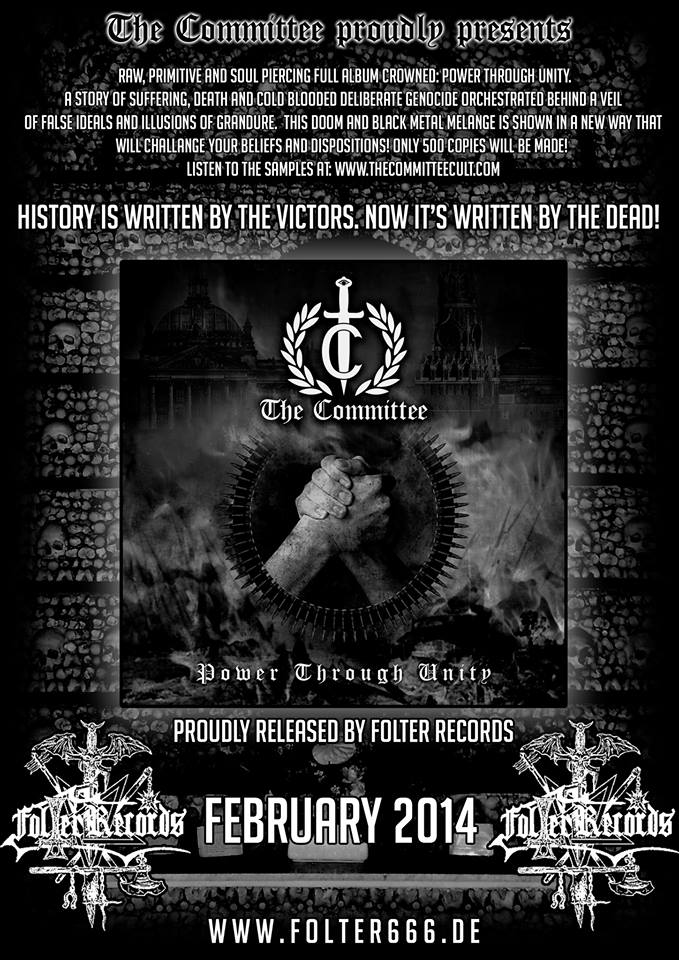 On February 28th 2014, THE COMMITTE, an international project based in Belgium, will release it’s debut album "Power Through Unity" via Folter Records. Be prepared for a dark time travel back to Russia at the end of the monarchy. To give you a first insight in their work, THE COMMITTEE has published a track by track about the songs on "Power Through Unity" – feel free to use it:

Song 1. Not Our Revolution
This song tells the story of foreign agents under now famous names who were sent into Russian Empire to overthrow the Czar and to take control of the land and its natural resources. This theme was also played out in the turbulent 90’s. The main focus lies on the extermination of millions of people who opposed the regime of the Bolsheviks and their brilliant mind games.

Song 2. The Man of Steel
Joseph Stalin is without a doubt of the most controversial figure of the past century. In this song facts from the Anglo Saxon and Russian sides are put on the scale in order to present this figure in a way never seen before in Europe. From Dictator who claimed the lives of millions of people, to an expert in logistic and strategic operations. Analysis of several books and reports paints an interesting picture of this man. No sides are chosen in this matter. Only results are analyzed.

Song 3. By My Bare Hands
The infamous gulags have scarred the face of Russia for decades. Even before the arrival of Stalin. By My Bare Hands tells the story of inmates and other unfortunate souls that ended up in these work camps and using their blood, sweat and labor rebuilt a country of peasants into an industrial power. The atmosphere of pure desperation and sorrow permeate every note of this chapter.

Song 4. The Last Goodbye
This song reflects the pure sorrow and horrors of war and the people on the front lines. This song tells a story of a soldier ( Russian AND German ) who are sent to the mindless slaughter. They leave behind family, wives and children with hopes for a safe return. What is important to mention is that the soldier realizes the meaningless slaughter and even reconciles with his opponent. This song breathes with Siberian cold winds that strip the skin off the bones.

Song 5. Katherine’s Chant
The Katusha missile launchers were a devastating force on the theater of WWII. This song reminds the listener of the harsh conditions of the soldiers who fought and died in those times. Pure black metal spirit of this song reflect the constant presence of death that points its sharp claws at the next unfortunate victim. For a boost of moral the song finishes with a Russian version of Katusha sung in duet with the guest vocalist.

Song 6. Power Through Unity
The title track is focused on pure strategic manipulations that took place before the WWII. From a 2 year research we concluded that the WWII was very important to many "outside forces" who had great importance in neutralization of German Reich and Soviet Russia. The results of this devastating conflict are evident until this day. Neither the German, nor the Russian side is to blame for any of the past mistakes. This song sends a message of reconciliation between the Germanic and Slavic nations. This unusual message takes a break from politics and ideologies and hovers above these foolish principles in order to see the big picture. People were used to stir up emotions and hate in order to kill off powerful nations who can stand in the way of the current ( and previous ) status-quot. Conflicts like India / Pakistan, Yugoslavia, Fall of the USSR and French revolution have outside interests who are pragmatic and ruthless. The message of reconciliation between the Germanic and Slavic nations is presented with a surprising twist of a part of German and Russian anthems in the song. The music permeates with hope, ambition and endless energy.

More information about THE COMMITTEE can be found here: