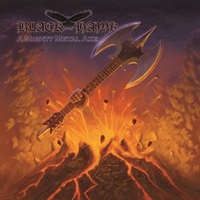 Originally delivering their traditional metal sound to the masses from 1981-1997, they reformed in 2001 and since then are on album number five with "A Mighty Metal Axe". The quintet firmly play from an old school standpoint: heroes from the 70’s and 80’s scene like Judas Priest, Saxon, and Accept factor heavily into songs like "The Fighter", "Nightrider" and "Killer" from the street level tempos and riffing to the high octane oriented vocals.

Udo Bethke will not strike many as a twin to Halford or Dickinson- his higher range has a little bit of that warble-like charm that many other German traditional singers feel comfortable with. It’s much more noticeable on a ballad like "Venom of the Snake" or the double bass oriented follow up "Beast in Black", and the more I listen to the album the more another German act Paragon comes to mind for Udo in terms of spirit and strength of character.

Pluses outweigh the minuses about "A Mighty Metal Axe" – guitarists Gunter Kruse and Thorsten Bettge deliver great dual rhythms and supplement with interesting counterpoint clean parts at times, most evident on the 6:11 "Fear", and the overall production is crisp and clear without being unnatural. Black Hawk is a band that prefers black leather, probably a few synchronized stage moves, and will get many a fist waving in the air paying homage to the old school spirit of heavy metal.

I know plenty who support this style. Black Hawk is adequate at getting their music across in a simple and quick manner, but I doubt they will ever ascend the ranks to their NWOBHM and German heroes.