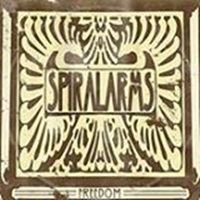 Guitarist Craig Locicero made his mark in the metal community with his work in Bay Area thrash favorite Forbidden. Following their demise, he moved into this hard rock act SpiralArms, a sextet of musicians with a strong affinity for the throwback 70’s and everything stripped down and gritty. "Freedom" is their sophomore release, three years beyond "Highest Society"- and is an 11song rally cry for bluesy spunk, wah wah pedals, and a vocalist in the Sabbath/ Zeppelin tradition with guitarist/ vocalist Tim Narducci.

A little bit of the stoner rock/ grunge scene comes into play on "Dropping Like Flies" and "Blackmoon Morning", as if SpiralArms look at the groundwork created by Kyuss, Soundgarden, and Queens of the Stone Age and hone in on killer, down-tuned guitar riffs matched with solid rhythms, tempos and swaying grooves. It shouldn’t be surprising that Black Sabbath’s "Tomorrow’s Dream" also gets a run through, complete with old school cow bell hits from Ron Redeen and Locicero’s tasteful lead work that would make Iommi proud to see the legacy live on.

Great songs of this genre come from within, lock into the right sonic combination musically and vocally, and make you want to return consistently to promote that same uplifting feeling. SpiralArms do that and more on "Freedom", and prove along with Orchid and Rival Sons another new burgeoning scene developing across California.