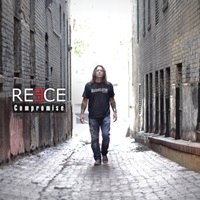 American singer David Reece has an impressive discography through the years. Many will first remember his voice on the 1989 Accept album "Eat the Heat", replacing the one of a kind Udo at a time when the band definitely sought to commercialize their stock traditional metal sound. Since then he’s performed on a few melodic hard rock albums with Bangalore Choir, a Gypsy Rose album and a recent foray into a duo effort with Gypsy Rose founder Martin Kronlund simply called Reece-Kronlund – never losing an ounce of his professionally potent range.

"Compromise" is the second solo album of David’s career, and he’s assembled many capably players to flesh out these compositions. Bassist Ronnie Parkes and guitarist Jack Frost from Seven Witches, keyboardist Paul Morris who has worked with Rainbow and Doro, plus special guests Andy Susemihl and Christian Tolle on guitars, as well as production/guitar help from Kelly Peterson give David an adequate platform to just sing his heart out on these 11 tracks. Those who expect everything to be aggressive and upbeat need to know that "Compromise" is more of a record that showcases all facets of David’s range- tender and restrained on the acoustic oriented ballad "Someone Beautiful", fiery and go for the throat on the hard rocking "Disaster", and reaching into the Dio/ Gillan from the mountain top terrain with the slower, darker "Evil Never Dies".

You’ll even get a couple of songs that would have been perfect for hard rock radio 25 years ago- "End of It All" just has that engaging guitar hook and vocal melody that go in tandem as the best highway music should and the Dokken-like "Where My Heart Belongs". The only disappointment comes up in David’s cover of the Credence Clearwater Revival classic "Fortunate Son" – not from his vocal standpoint, but the obvious use of computerized drums that give the tempo a very robotic feel.

Musicians know their time on this earth is short- so you might as well get in there and record all the ideas you’ve got. "Compromise" is another exciting melodic hard rock release and proof of David’s timeless, bluesy range and power house control.