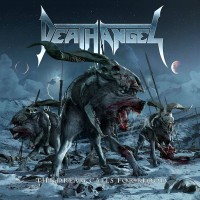 American thrash giants Death Angel are back with a fresh studio effort in the shape of The Dream Calls for Blood, their follow up to 2010’s Relentless Retribution. The album consists of 10 new tracks, taking the listener on a tour de force through the band’s hard hitting, fast flicking, gut wrenching brand of thrash metal.

The album opens with a definite highlight with ‘Left for Dead’. It is a track that gains momentum as it goes and by the time it ends, it has left the poor sap arrogant enough to keep their headbanging ways going through the whole thing, rotting in a pile of sweaty bones, as nothing can withstand the never-ending pounding of the song’s fast beats. It is the perfect opener that sets a bar the album never matches, but that isn’t to say there aren’t other stellar efforts on The Dream Calls for Blood. In fact, it’s a remarkably solid album that leaves little room for improvement and shows, just in case anyone was still wondering, that Death Angel are one of the hardest hitting metal bands working today.

An extra plus in the album’s pro margin is that it offers quite a lot of variation throughout the 10 tracks. Some rely heavily on lyrical hooks, like the title track ‘The Dream Calls for Blood’, while some rely more on the musical abilities of the band like ‘Succubus’. The album doesn’t always succeed in Death Angel’s attempt to offer new flavours of their thrash madness, but they get points for trying at least.

Overall, The Dream Calls for Blood is a stellar effort by the American quintet. It carries the torch for thrash metal everywhere and buries any notion that the wells of metal have been fully tapped.