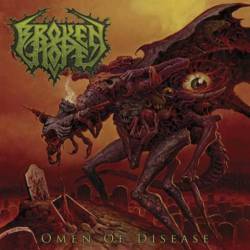 Broken Hope are finally back in business! Being put on hold after 1999´s "Grotsque Blessings" (an album that did not hit home), Jeremy Wagner & Company is back with their sixth full-lentht "Omen of Disease".

BH have never quite reached the potential they showcased on debut "Swamped in Gore", an album that is highly underrated in my book.

Sadly their original vocalist passed away a couple of years ago so it was with some excitement (for me at least) they welcomed Gorgasm vocalist Tom Leski in to their fold on "Omen Of Disease". They who know BH ´s earlier material and Gorgasm know that Tom´s vocal is a couple of notches more brutal/guttural.

And it´s without doubt that Tom´s vocal presence have changed the overall sound of Broken Hope anno 2013. He makes the whole experience a lot more br00tal and after a couple of spins I find it fitting and enjoyable to listen to (I have never been that much into Gorgasm).

Wagner appears to be in tiptop shape and the riffs sound both fresh and original (as much as they can do in this genre). The tempo varies from midpaced to full speed and it works outstandingly. They manage to incorporate both melody and blasting in the arrangements and much credit must be given to the drummer. The drums lead the way and keeps everything in place and order.

The lyrical content is of course of the ultra gorey kind and except from a cheesy "cannibal family dinner" dialog that takes some of the seriousness away they shock enough to qualify as "gore" metal.

If you don´t know Broken Hope, "Omen Of Disease" is a perfect place to start.

DARK AGE – A Matter Of Trust