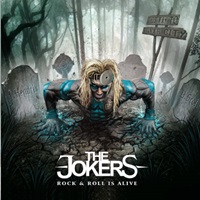 Throwback hard rock seems to be the rage these days- as younger generations inspired by the likes of Black Sabbath, Led Zeppelin, AC/DC, Deep Purple, and so forth ignite their brain synapses to churn out their own take for the current scene. The Jokers hail from the UK and wish to wedge their way into your collection with their second album "Rock & Roll Is Alive"- a quick hitting 11 song set of cuts that bring bluesy hard riffs and vintage melodies back into our hearts.

Up tempo material like the title cut and "Night Driver" gives AC/DC and Bad Company a run for their UFO money, as vocalist Wane Parry and guitarist Paul Hurst form a killer combo of explosive energy, naturally playing off of each other’s infectious good nature. Bassist Simon Hurst and drummer Chris Poole deliver 4/4 tempos as solid as they come, be it steady in the pocket for "Silver City" or slightly dramatic on the Who-like "N.Y.C." (the latter having similar guitar echo elements as "Won’t Get Fooled Again"). And if you want something with a country/ southern rock swagger in the ballad department, the acoustic driven "Bring It On Back to Me" should fit the bill just fine.

At certain times I feel the vocal patterns are a little too nursery rhyme laden that can water down the stirring musical hooks – "Dr. Rock Head" the prime example. Overall though the good outweighs the bad- so for those who need another 70’s inspired act with possible a touch more commercial muscle, The Jokers are no laughing matter.