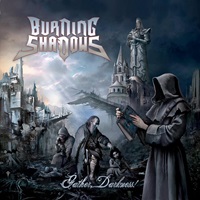 Burning Shadows is a Maryland quintet releasing their second independent album in "Gather, Darkness!"- one that I’m familiar with from previous fanzine days way back in 2002 with their debut "The Darkest Winter" EP. Writing an album based on a Fritz Lieber novel with the same name, the band breaks the album up into 4 parts with 11 tracks- 2 instrumental and 9 vocally driven- and its 45 minutes with traditional/ US power metal riffs and trademarks abound.

Manowar, Jag Panzer, and Iced Earth were the three main influences that came to my ears in terms of the epic/cultural riff tendencies, the slight power tempo changes and the larger than life choruses. There is plenty of tasty guitar hero worship parts to headbang and air simulate- check out "A Thousand Lies- Intra Vires" and the 6 minute instrumental "A Thousand Lies- Onward" for some killer back and forth action between rhythm guitarist Tim Regan and lead guitarist Greg Jones (loved the galloping time change around the 4:05 mark of the latter).

As a vocalist Tom Davy carries more of a multi-faceted power range rather than always going for the bird call highs. "To Ruin & Divide- Man from Myth" embodies all characteristics of his voice from the verses through the choruses- injecting a lot of Matt Barlow personality along with some clearer NWOBHM charm. The intriguing part of "Gather, Darkness!" is the fact that the band choose to intertwine all 11 tracks with nary a break- and yet there is enough fluctuation in terms of the song construction, range in tempos, and instrumental play that as a fan of power metal I’m not inclined to leave the release before its completion.

Sure to go over madly in countries like Germany, Greece, and the Far East, Burning Shadows produce stellar guitar oriented power metal with enough variety to capture my headspace – and bring me back to my early 80’s metal heritage.