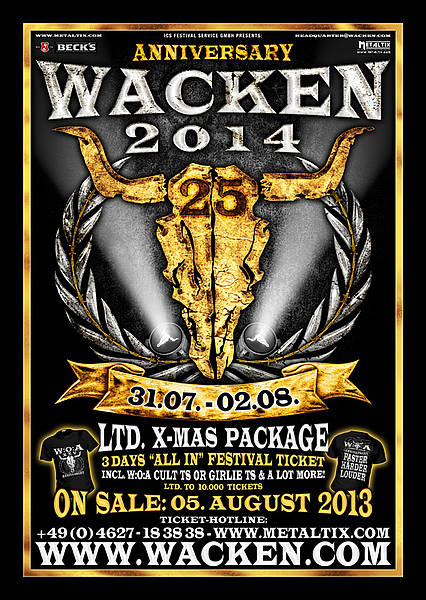 The biggest Metalparty of the year is still in full swing and you made the festival to an unbelievable event. We´re looking forward to celebrate the last hours of W:O:A 2013 with you!

And already we announce the first package of stunning mega acts for next year! In 2014 we will celebrate 25 years of Wacken Open Air – 25 years of metal madness – together with you!

The biggest metal party of the world is what it is because of you – the fans! And we will again present a high-class and varied line-up with great Wacken debutants, bands which haven’t played for a long time and also some of the beloved Wacken classics.

The first bands for the 25th Anniversary are:

Amon Amarth
Death Metal from Sweden – a fertile topic which will always lead you to Amon Amarth after some time. Get ready for some Viking hymns at next year’s W:O:A!

Apocalyptica
Finnish band Apocalyptica will play together with an orchestra in 2014. This will be an exclusive Wacken Open Air show – all songs are especially arranged for this!

Arch Enemy
In 2013 the Swedish band was forced to cancel all of the summer dates, but they will compensate this when they play at Wacken Open Air 2014!

Avantasia (Only German Festival Show in 2014)
Tobias Sammet, his guest musicians and his exceptional metal project will come back to Wacken for the third time. Get ready for a superlative show!

Behemoth
Behemoth will return to W:O:A! After more than one decade the Polish death metal sledgehammer will be part of the program at the biggest metal festival in the world.

Children of Bodom
With the new album "Halo of Blood" the Finnish melodic death metal masters Children of Bodom will return to Wacken. And the ones who have seen any of the past COB performance know for sure: This is going to be a blast!

Emperor – In The Nightside Eclipse 20th Anniversary
The Norwegian black metal legend Emperor returns to Wacken! After some years of rest, there is finally a new possibility to hear the legendary tunes!

Iced Earth
The American power metal band Iced Earth shouldn’t be missed at the Wacken anniversary too. And because their new album Plagues of Babylon will be released in spring 2014, the band will play some new material too at the festival!

King Diamond
You want the King, you will get the King – at the 25th W:O:A! Finally the founder of the legendary band Mercyful Fate will rock Wacken Open Air. The King and his music are a heavy influence for the whole metal genre and the show will be a blast for sure!

Kreator
The German thrash hammer Kreator will smash the Wacken crowd another time in 2014. Get ready to raise the flag of hate!

Prong
The influence of Prong to the whole scene is undisputed; their album Beg to Differ was style-defining for the groove metal genre itself. And now the band will play Wacken for the first time!

Schandmaul
Without any doubt: Schandmaul are one of the most important medieval rock bands! And they will rock Wacken again in 2014!

IMPORTANT: The tickets for Wacken Open Air 2014 are personalized! We have summarized all information here.