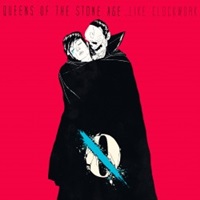 The sixth studio album from Queens of the Stone Age, "…Like Clockwork" comes out 6 years after their last effort and appears to be a much more bluesy, laid-back psychedelic rock affair than previous efforts. Vocalist/ guitarist Josh Homme belts out "My God is the Sun" with dark mystery, then follows up with the slower, softer "Kalopsia" which could be a distant twin to Chicago’s "Color My World" in its first moments only to twist into an alternative heavy psychedelic rock monster with these circus riff elements.

"Keep Your Eyes Peeled" opens with this low bass groove and subtle, stair step piano/vocal accompaniment that long-time fans will savor- the subtle ebb and flow that gives QOTSA such charm and uniqueness within the scene. Expect everything from slide guitar and tambourines to mellotron on this record- as well as elements of the self-titled The Cars debut on "I Sat by the Ocean" or The Beatles meets Pink Floyd for the 6 minute "I Appear Missing". Dave Grohl is one of the three drummers that perform on the album, playing half of the 10 tracks with his usual rock method comfort- and you also get guest appearances from luminaries such as Elton John and Trent Reznor.

Those who wish to label QOTSA as mere stoner rock would be sadly off base. "…Like Clockwork" shimmers and shines because of its attitude, and the quartet’s willingness to use all the current tools of the trade to their benefit while still keeping the emphasis on real performance and true songwriting. You don’t have to be full out bombastic to convey the wide scope of rock- sometimes space and openness allows crevices that challenge what we hear.

"…Like Clockwork" should be an album that people return to frequently.

VENOMOUS MAXIMUS – Beg Upon The Light