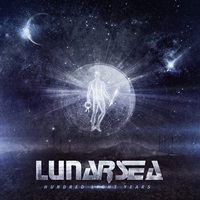 The origins of this act start in 2003 out of the remnants of a power progressive band Hollowearth, evolving into the current melodic death metal band Lunarsea. The five-piece now release their third album "Hundred Light Years"- and for the Italians they appear ready to ascend up the ranks with their catchy blend of extreme riffing, harmonic breaks, occasional use of clean vocals, and interesting blend of electronic keyboards that display nuances of 80’s new wave and progressive artists.

Many times you worry about musicians who want to infuse basic stock metal sounds with a plethora of non-metal tones in the hopes of establishing their own sound. I do believe songs such as "Next and Future" as well as "Aphelion Point" establish a melodic death/ meets sonic push balance that keeps the proceedings fresh and almost on your toes. Many will think of the grace of Dark Tranquillity when they hear much of this material- but I also hear a sense of urgency that younger, aggressive bands display as well as some of their previous symphonic power influences that carry "Ephemeris 1679" and the 7:43 epic "As Seaweed" into the upper realm of the genre (I love the guitar/keyboard break in this latter one from Fabiano Romagnoli).

Special guests include Emanuele Cassali of DGM/Astra and Tim Charles, the voice and violinist of Australian progressive death masters Ne Obliviscaris. The main lineup though is the star of the show- as this will be 49 minutes and 10 songs that you won’t soon forget in the melodic death genre. Lunarsea also takes a fascinating lyrical concept throughout regarding a lonely man’s exploration through an astral expedition, wishing to reconnect with the galaxy.

In a just world, Lunarsea will be touring the globe and winning over thousands in the audience because this is superior, high quality material that shouldn’t go unnoticed. Be in on the ground floor while you can, as they’ve been making the right moves songwriting-wise and stylistically with every album.