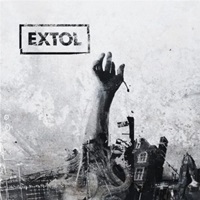 Returning to the scene after a 5 year break in 2007, Norway trio Extol continues to lob curve balls at the listeners with their sound on this self-titled fifth full length album. Starting in their early years as a technical death metal band and gradually shifting to a more alternative/ progressive metal landscape, the 10 songs here present an amalgamation of all eras Extol: extreme and clean vocal employment, occasional rougher death metal textures along with subtle poly-rhythmic tempos and significant technical changes in guitars, keyboards, bass, and drum parts. All the while keeping the songs at a reasonable 4-6 minute clip, and allowing melody to be a key ‘catch’ factor so that you don’t feel lost in a musical math maze.

Drummer David Husvik, extreme vocalist Peter Espevoll and clean vocalist/ multi-instrumentalist Ole Borud (guitars and flute) provide ample dynamics, with the smooth new age-like melodies in tracks such as "Betrayal" and "Wastelands" almost veering into Moody Blues meets Yes territory. Extol understand when they need to provide furious instrumentation to get their point across- as the heavier "Ministers" can attest to- but they also succeed in expanding the horizons of progressive metal with the new age harmonies contrasting against the brutal death vocals for the shape shifting "Behold the Sun". You’ll also gain perspective from the material with softer instrumental work like the 4:16 "Dawn of Redemption".

If I were to compare the band musically to anyone, I would give comparisons to acts like Atheist/Cynic careening against Dream Theater and Coroner, with a little bit of a Believer tact, along with the aforementioned Yes/Moody Blues mysterious harmonies and possibly a little bit of Devin Townsend in the mix. Couple this with positive/ Christian-oriented lyrics (but not overtly beating you across the brain with them), and you will find an act that shines with originality.

HATE FORCE ONE – Wave Of Destruction