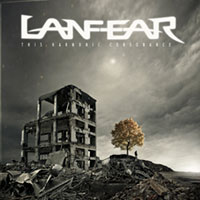 The sixth studio album from Germany’s Lanfear is once again welcome to this journalist’s ears. Many listeners prefer artists who stick with the tried and true paths of their mentors- and in the case of European progressive/ power metal, there are so many who take what has already been done by Helloween, Dream Theater, Fates Warning, or Queensryche and attempt to pass off something as their own. This quintet subscribe to a variant philosophy- one that injects rich vocal harmonies, instinctual guitar interplay and counterbalance plus an atmospheric element that keeps you on your toes from song to song.

The spotlight shines brightly on the multi-faceted vocal approach from Nuno Miguel de Barros Fernandes. At times rolling with the soaring comfort of a Ray Alder, then throwing a high pitch scream with the strength of James Rivera, he can add the curve ball convincing shouting in a song like “Camera Silens” that gives you a triple threat appeal most progressive singers aspire to but rarely achieve. The same song features a marching rhythm against some speedy acoustic picking that rises and falls amidst the furious electric riffing – possibly one of the better drum performances from Jurgen Schrank as he walks the pounding double bass/ changing tempo tightrope the arrangement requires.

Sometimes the riffing structure employment out of guitarist Markus Ullrich is one that explores the dark aggression of say Evergrey along with the thematic cleanness of Fates Warning – with the keyboard parts  from Richie Seibel filling more of a mid-range sonic landscape, evident most in the up-tempo “I, Robo Sapiens”. The rich vocal harmonies I spoke earlier about come into prominence on the majestic “The Reverend”, not just in the usual chorus parts but also filter in during most of the verses to give you an AOR feeling to the track. There really isn’t one song out of the 9 main cuts (excluding the 65 second intro) that doesn’t motivate deep listening, and my favorites include the 7:42 counterpoint epic “Idiopathic Discreation” and the spoken word samples that weave within the atmospheric/ ethereal ballad “Word Not Spoken”.

Lanfear prove with “This Harmonic Consonance” there is plenty left in the progressive-tinged power metal territory- as long as bands reach into their creative minds and execute with finesse and grace.