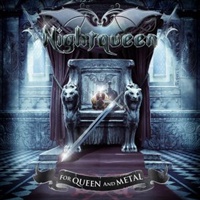 NIGHTQUEEN – For Queen and Metal

Perseverance would be an accurate word to describe guitarist Rex Zeco in his quest to move this Belgian symphonic-oriented power metal sextet from formation to debut album stage. He started Nightqueen at the end of 2004- and just now in 2012 we are seeing this debut album “For Queen And Metal”. Never relinquishing his professional ideals, the fruits of finding the right combination of musicians allows you the listener to enjoy a balance between traditional, older power metal sounds with a slight tip of the cap to modern keyboard textures.

Female vocalist Keely Larreina isn’t one of those pop oriented crooners disguising herself as a metalhead- her voice possesses the classic note holding propensity of a Ronnie James Dio or Leather Leone where she isn’t afraid to rise and descend into stronger registers. “Mystical Nights” and “Lady Fantasy” are two solid examples of all aspects concerning her strength and conviction melding to the Nightqueen musical framework. As far as the other five musicians, I’d describe the Nightqueen approach as first an 80’s guitar oriented sound, relying on a Dio/ Savatage platform with tinges of early Queensryche and Crimson Glory- although much of the drumming from William Blodyn probably comes from a European/ Tad Morose power orientation. I especially enjoy the slower ballad “Nocturnal Thoughts” where the guitarists employ a variety of clean lines and power chords that allow Keely to really use all aspects of her range to the song’s emotional impact.

One criticism would be the track order- the middle of the album lags a little with too many songs of a similar mid-tempo orientation. “Rebel To Rebel” is one of the faster cuts that I believe could have been pushed up a little as an energy boost to the normal power/epic proceedings. Sun Caged guitarist Marcel Coenen graces the album with a couple of guest solo spots, the best being his fleet neo-classical finger work on “Screaming For Mercy”.

Nightqueen are off to a good start here- this isn’t your typical symphonic laden power metal that comes from Germany , Italy, or Finland- they remain steadfast in the classic cause and as such should gain ground from the traditional pack of fans.