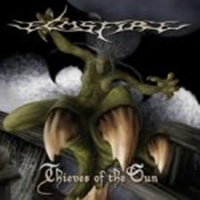 ELMSFIRE – Thieves Of The Sun

An intriguing traditional, epic styled metal act from Germany here. Formed by guitarists Germano and Doro (not to be confused with Doro Pesch) in 1999, they’ve evolved through a series of demo tapes, EP’s and lineup changes to now unleash their debut album “Thieves Of The Sun”. The sextet incorporate a feel for cultural and majestic riffing- coupled with atmospheric melodies and occasional medieval motifs- to make songs like “Taipouri”, “Worth A Tale”, and “Stormchild” worthy of most Falconer, Oceans Of Sadness and possibly older Blind Guardian mavens.

Their sense of pacing and catchiness with their guitar parts, bright keyboard flourishes, and a rhythm section who keep the arrangements fresh and invigorating gives Elmsfire an edge over the competition. Erdmann’s singing keeps the band away from normal soaring escapades into more of a basic mid-range capability, along with a slightly James Hetfield meets Fernando from Moonspell quality- some of his best performances appearing on the more dramatic “Escape”. And what could be more appropriate to tackle lyrically than the adventures of Moby Dick in the song “Ahab”- featuring a pirate narrative opening and traversing the stormy seas with a variety of double bass flavors and multi-part chorus harmonies.

“Thieves Of The Sun” will not be a stunner right out of the gate. Most epic oriented efforts require sustained listening to gather the full scope of a band’s intention. The natural sounds Elmsfire employ separate this from the pack- as I feel that certain styles of metal need not be digitally crystal clear for they lose long term impact.

The lengthy development of the band pre-record deal should give the listener a clue that Elmsfire are in this for more than any possible passing trend. Keep an eye on this act- they could go places.