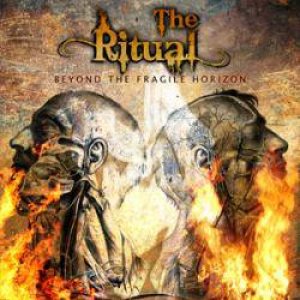 THE RITUAL – Beyond The Fragile Horizon

The Ritual is ready with their debut album ‘Beyond the Fragile Horizon’, continuing the always popular sound scape metal meets melody. It starts of with the album’s namesake ‘Beyond the Fragile Horizon’, an instrumental which fades into “Hysteria and Madness”, a song capturing the bands two faces without really living up to its full potential. “Jason on the river” grabs a hold of the listener and never let’s go. With a catchy sing-a-long driven chorus and heavy riffs, it is the album’s first highlight as the track counter reads ‘three’.

The musical diversity shown on ‘Jason on the river’ is a recurring theme throughout the album. Sadly, The Ritual fails to show any variation on the assembly line, producing frightfully similar songs time and time again. Songs like “Show me what you can do” and “Shoot me” copies the structure of “Jason on the river” to an extent where it feels like you’re listening to the same track, this is especially the case for the chorus. One positive thing in regards to the melodic aspects of the album is that the calm, radio friendly choruses are never dominating the aggressive foundation of the songs. Its metal with a melody, not the other way around. A perfect example of this claim is “The Liar”, a heavy as hell track showing the bands abilities when it comes to making aggressive, metalcore-ish music with a melodic chorus thrown on top.

All in all “Beyond the Fragile Horizon” is solid effort. It has a well structured distribution of aggressive and melodic metal. The main downfall of the album is the repetitiveness of the song structure heard early in the album. Considering this is only the debut album for the Italian four-piece, it is possible to hope for some improvements in the variation of the song structure before the band locks in their sound forever and ever.