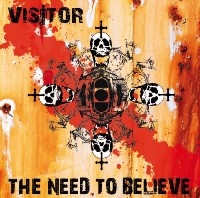 “The Need to Believe” is fairly straight forward melodic death metal that borderline with metal core. The strength of the band is definitely their melodic hooks, which without exception comes in the form of a chorus sung with boyband clean vocals. Herein also lies the bands biggest problem. In the current jungle of melodic death metal and metal core it takes more than average riffs and predictable song structures to stick your head out of the pack.

In addition to the unoriginal material, the production is too thin. There seems to be a lack in the lower mid frequencies which would normally provide a nice chunk when cranked to the max. The production is decent by all means, just not top notch. This might be my background as sound tech speaking, but I just can’t stop noticing it. If compared to Killswitch Engage or Scar Symmetry, the production could use some more kick.

All in all “The Need to Believe” is a decent effort. Nice instrumental performance and riffing. Though Visitor is not without potential they do lack the little extra spark of identity to make them stand out. If they can improve their production and at the same time come up with some less conventional material, there is no reason why they won’t stick their head out next time. As for now Visitor appears to be like a zombie among hordes of other sleepwalkers, parked in neutral waiting for some meat to fall in their lap.