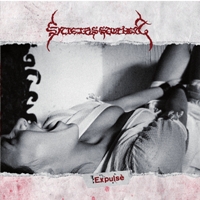 I am sure there are hordes of Russian metal bands in existence. The only difference Russian metal seems to have from, say Asian, South American or metal hailing from other less orthodox metal countries, is that the few Russian bands that reach my ears all are above average quality. This is especially the case when it comes to black metal. In the early 2000’s Rakoth blew my mind with their avant-garde folk/black metal amalgamations. A few years later Tvangeste released their symphonic black metal masterpiece “Firestorm”. A relatively unknown gem that I still return to from time to time. Now I can add Stielas Storhett to this short list of quality metal of Russian descent.

I’m not quite sure why, but “Expulse” makes me think about Shining (Se) and their misanthropic black metal. Stielas Storhett isn’t fueled by depression in the same way as Shining but I do get the same gloomy mood from some songs. “Buried by Storm and Eternal Darkness” and “Angel of Death” particularly sets me in the suicidal depressive mood that has been Shining’s forte from day one. “Expulse” is more guitar oriented though, which definitely is a plus in my book. In addition Stielas Storhett is not afraid to move outside the box. On the title track “Expulse” a saxophone has a central place throughout the song, and it works like a charm.

I guess what appeals to me with this album are several things; the melancholic moods, the decent production (digital but still cold), the prominent guitar orientation, and the ability this band has to think outside the box. There is not much I dislike about this album. The band has their own identity, but I think this could be even more refined in the future. The melodic content doesn’t strike me as very original. That being said, this is an excellent black metal album for those who lean towards the dark, depressive and well executed when listing their listening preferences.

REGARDLESS OF ME – Pleasures and Fear