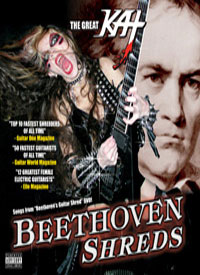 The Great Kat was a cult figure at the end of the 80s and early part of the 90s. It was primarily her first 2 releases "Worship Me or Die" and "Beethoven on Speed" that gave her most success. These are also her only two full-length. The rest of her discography consists of EPs, a double collecting CDs and 2 DVDs.

To call The Great Kat a great composer is completely wrong, but she has sped up major composers’ masterpieces and has always since the beginning in 1986 proved that she is a taltented musician on both guitar and violin. She is not a great singer, though. It’s just screaming and whining noise, and it is terribly tiring. Therefore, it is her instrumental songs and parts of songs that works best, also on this DVD … …maybe. I’m not sure.

There are only 7 tracks on this CD that is released as a promo for the DVD. 5 relatively short new recordings of songs she has previously done better, and 2 self-composed songs. One of her own songs on this DVD is  the best one. That is, there are riffs that make it the best. It’s called "Torture Techniques" and I claim that this is one of the better she has composed herself. Let us simply try to ignore the other self-composed song "IslamoFascists". It’s a terrible bad song that the world certainly would do better without. The 5 other songs are played very fast, but unfortunately they are not very successful. It was cooler before when these songs were first published. But it was the 80’s and last I checked my calendar, the 80’s are gone
.
There is nothing more to say on this matter. The girl has her 45th birthday this year, she has maintained the same image for 25 years and frankly it’s probably time to do something else soon.

GHOST BRIGADE – Until Fear No Longer Defines Us