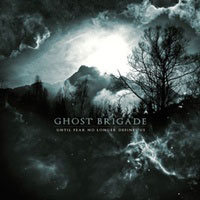 GHOST BRIGADE – Until Fear No Longer Defines Us

Curveballs keep people on the edge of their seats. Complacency reduces excitement and expectations. If an artist comes out of the gate swinging for the fences, fear creeps in regarding their resolve to deliver even more each successive time. Finland gothic-alternative-doom-death band Ghost Brigade have two exemplary full lengths to their cache (2007’s “Guided By Fire” and 2009’s “Isolation Songs“), setting up this third release for a breakthrough. I didn’t believe the quintet would merely coast into this important recording with a cut and paste effort of similar material. When reading early discussion from the band members themselves online about the contrasts between heaviness and melody, darkness and tranquility on “Until Fear No Longer Defines Us”, this writer salivates as dynamic constructs make for an emotionally exhilarating continuous journey – subsequently winning me over again.

Confidently striding into the album with a 4:17 acoustic piece “In The Woods” vocalist Manne Ikonen and guitarists Tommi Kiviniemi and Wille Naukkrinen are somber, as lines like ‘It’s so weird that when you get older/ feels like time is going faster’ reverberate in this turbulent world. The tempo of the album barely moves beyond doom pacing until the fourth cut “Traces Of Liberty” – almost setting you up for this atmospheric lull before laying down the thunderous 70’s Sabbath electric riffs, chest shuddering alternative bass and the steady, hypnotic drum parts from Veli-Matti Suihkonen. The follow up “Divine Act Of Lunacy” takes the best elements of Katatonia and Sentenced, surrounds them rhythmically with a tribal Tool backdrop and once again hones in with pacing and arrangement skills that force engagement of the deepest kind from the listener – kinetic, reflective, and on another level.

Manne appears to be opening his melodic voice horizons, saving the harsh growls and screams for the more sonic abrasive moments. An epic like the 8:50 “Breakwater” builds off of this cyclical guitar sequence that rolls in and out like the coming tide as Manne roars and sustains screams while the arrangement slows with this deep seeded working class despair. Their progressive moments are also low-key, such as the off-time clean guitar/drum sequence that serves as a centerpiece for “Cult Of Decay” that again brings to mind some 80’s alternative artists like The Cure or Big Country. The total package from songwriting to cover art to production are all top notch, reinforcing the seriousness of Ghost Brigade not only in a live environment but also in the studio.

My definition of music and its infinite appeal relies on musicians who come together as one while at the same time striving for creative visions and outlooks built upon personal observations, experience and genuine continual growth. Ghost Brigade set their sights on everything that makes me return to heavy music – the freeing nature, the lack of hard nosed judgment, the lows and highs, and the discovery of newness even after taking in the same album months or years beyond its conception.