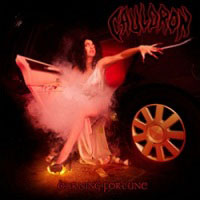 Venturing into retro territory is a risky business. On the one hand, you might strike a nerve in music lover’s nostalgic antennas. On the other hand, you always risk appearing repetitive, unoriginal and hopelessly out of place in today’s music scene. There are many successful retro bands these days, such as Bigelf, Ghost, Graveyard, Opeth and Hammerfall, to name a few. What these bands have in common, at least in my opinion, is that they somehow turn their retro influences to their advantage by somehow adding a fresh sounding element to their sound. Some of these bands are as stereotypical as they can within their genre, still they aren’t mere copycats, but actually make an attribution to the genre. Call it identity, call it the factor x or call it ingenious reappropriation of already exploited genres. It could of course also be coincidental. Maybe the time and place was just right for these bands…

Cauldron is a Canadian, Toronto based, heavy metal band. It sounds, looks and smells 1985 of the very hardcover product. The guys look like early eighties metal heads, and their image fit their music. The band sounds like a mix between 80’s American heavy metal and NWOBHM. The production is shady, but suiting the style I suppose, the music is pretty straight forward and well executed. I could have wished for some more intriguing riffs, as the ones on "Burning Fortune" are recycled riffs from the retro 80’s heavy metal bands that emerged in the 1990’s. Aside from this, Cauldron actually has a nice handful of memorable melodies going for them. These are of course also predictable, but at least they are catchy. The singer somehow reminds me of Klaus Meine, in a good way. So if you miss 80’s style American heavy metal, and a mix between said heavy metal and Scorpions sounds interesting, Cauldron might just be the perfect band for you. Me, I was amused for a week or so, but now I’ve moved on to greener pastures.

POWER THEORY – Out Of The Ashes, Into The Fire