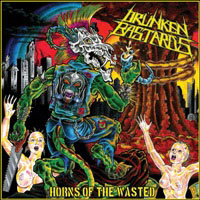 DRÜNKEN BASTARDS – Horns of the Wasted

Hungarian act Drünken Bastards (not to be confused with Drunken Bastard from Germany) play a type of punky retro crossover that calls to mind The Accused, Toxic Holocaust, The Exploited and Venom. D-beat drumming, loose riffs and spewed vocals bring the listener back to the late 80’s when the whole thrash thing was collapsing under its own weight.

I’m a fan of this type of music, and Drünken Bastards are a competent enough act, but “Horns of the Wasted” is ultimately limited by the fact that most of us have heard it all before (and it was done better then).

A final word of warning – I have seen this CD described as ‘black thrash’. It isn’t! I have also seen it described as full-length, but it is only 19 minutes long and that includes the obligatory crappy sound-bite intro. There are plenty of better things for you to spend your hard-earned cash on. Beer, for example!

SIRENIA – The Enigma Of Life

SEVEN THORNS – Return To The Past