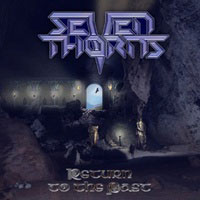 SEVEN THORNS – Return To The Past

Another act who’ve been around awhile honing their skills and craft – Denmark’s Seven Thorns release their second album 4 years after their "Glow Of Dawn" 2007 debut. Oh glory to happy power metal – keyboards that glisten with the bells of glory, drums that lay down a persistent, steady double bass and vocals that invite loud crowd participation. It’s a genre that evokes a love it or leave it philosophy – as many bands burn themselves out with all the consistent chord progressions, grandiose atmosphere and positive, fantasy laden lyric journeys.

These musicians certainly love the current derivatives of the Helloween/Gamma Ray style – especially Freedom Call – on tracks like “End Of The Road”, “Spread Your Wings” and the closing title track. Vocalist Erik Blomkvist has a deeper range especially when he delivers many of the lower melodies, but fear not he can reach those higher angelic notes when he has to ascend to the stratosphere. The guitar playing often mirrors the given vocal harmonies – allowing the listener even more of a chance to reverberate the hook lines for days on end.

A neo-classical penchant sprouts during tracks like “Through The Mirror” and opener “Liberty”, the latter fueled with the guest solo work of At Vance guitarist Olaf Lenk – and yet Seven Thorns aren’t excessive in their instrumental dexterity and keep everything honed in to a solid songwriting framework. I do believe the keyboards take a slight lead in the main riff proceedings, so understand that while this is still powerful "Return To The Past" relies on many of those conventional tones that could put potential listeners over the edge.

Seven Thorns aren’t quite at a level where they should be considered in the upper power metal class – but there is enough variation and above average guitar play and vocal ability to recommend this album above most of the Freedom Call catalog through the years.

DRÜNKEN BASTARDS – Horns of the Wasted

PICTURES OF PAIN – The Reckoning