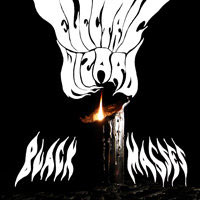 The Wizard lives! The Doom cult from Dorset has again managed to conquer up an album with a crushing sound and killer riffs! Let your mind wander astray with the hypnotic tunes and songs like “Venus in Furs”, “Turn off your Mind” and “Satyr IX”. Black Masses truly is a ‘Black acid nightmare’.

An amazing evening, with some of the best of doom from Norway and Japan. Both bands delivered a perfect product. With songs varying from groovy, to spacey, to just damn heavy, this concert is one of the most
enjoyable concerts I have been to, and ranks as number one for 2010.

Seeing Ulver in concert.
To actually attend an Ulver concert has always just been dreaming and wishing, I never thought I would have a chance to experience this experimental group live. It turned out not to be a mere concert, but more a sentimental and amazing voyage through emotions. All in all, a great performance!

I am going to have to answer Electric Wizard’s "Black Masses" on this one. Because to put it short; this cover sums-up everything I like about Electric Wizard. It shows the occult and black magic that is present, the intense evil but also the groove and trippy fumes that oozes out from every song they make.

Well, be it the more traditional take on stoner/doom, like on their debut album, or the mind-blowingly heavy Dopethrone, or the 70’s occult Witchcult Today, Electric Wizard has never failed along the way. Always refreshing, always heavy and always evil, again this band is mentioned on my list of “top things of 2010”. Not to seem like a fanboy, this has simply been a good year for The Wizard.

Seeing as SunnO))) has released some excellent albums the past years and just hinted at a new album for 2011, I’ll put that as my biggest hope for next year. Gimme that good ol’ drone. “MAXIMUM VOLUME YIELDS MAXIMUM RESULTS.”