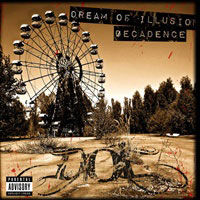 It’s fascinating to watch the development of an act from its formative stages through debut album. The average listener is unaware of the years of refinement in terms of time, energy and effort expended with learning their instrument, finding the right members, coming to a consensus on a style and then letting nature take its course. When looking at Italy’s Dream Of Illusion, you’ll find a five-piece who spent years slugging out covers from Deep Purple, AC/DC and Guns N Roses into competing in original music contests to gain exposure. Finally with a firm singer in tow during the summer of 2007 with Francesco Valentini, they hit the live club circuit and pushed their heavy, power melodic metal sound to domestic audiences.

For a debut album I’m quite impressed with their energy and vision for "Decadence". These 11 songs (excluding the intro, outro and interlude) possess the fire of melodic power metal more in line with acts like Brainstorm and Mystic Prophecy than anything symphonic or keyboard happy that seems to be prevalent in Italy. Francesco’s voice is much in line with Michele Luppi during his Vision Divine days – soaring with that melodic conviction through a double bass monster like “Mistery” and then turning in a tender, low key delivery for the quieter ballad “Two Skies”.

Later on in the album you’ll get a number of latter day Nevermore style guitar parts, including “Hysteria” with some insane solo tapping antics out of Riccardo De Fanti and Andrea Giarola. Closer “Back To The Evil Age” floats back and forth between heavier rhythms and epic heroic melodies and gang-like background vocals- leaving me in a state of desiring more so most often than not this receives multiple playbacks.

Dream Of Illusion stand in line to join the likes of veteran acts like Primal Fear and the aforementioned Brainstorm if they continue to write material as exciting and instrumentally sharp as on "Decadence".

CHAPTER OF HATE – Chapter of Hate