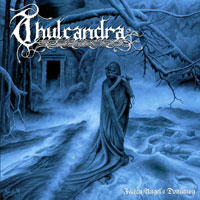 It can sometimes be difficult to write a review without comparing the band being reviewed to some larger, more established act. In the case of Thulcandra, it is all but impossible to mention their name without pointing out the very obvious similarities to Dissection. Take a look at the Necrolord artwork. Now turn the CD over and look at the track list. Yes – there’s a cover version of "The Somberlain"! Thulcandra don’t hide who they are or what they do, and ten seconds listening to this release will tell you who their influences are.

The production and sound is so close to “Storm of the Light’s Bane” that you could be forgiven for mistaking the two. We have the same beefy guitars, rasping vocals and the trademark high-speed barrage of drums. The songs are of a consistent high quality, and the musicianship is so good I almost forgot that all of the guys also play in Helfahrt.

However good Thulcandra are, there are times when the similarities to Dissection work against them. For a start, the acoustic passages could never hope to equal the work of Nödtveidt and Co. and the sheer genius behind classics like “Where Dead Angels Lie” is lacking. Another thing is the predictability of the music. At any stage you could ask “What would Dissection do next?”, and that is where Thulcandra will take you. All very well if you can’t get enough of Dissection and are happy to accept substitutes, but it can wear thin at times.

The highest praise I’ve read for “Fallen Angel’s Dominion” is that it is the album some would have preferred Dissection to release instead of “Reinkaos”. (How many times will we hear that one?) I wouldn’t go that far, but I would admit that “Fallen Angel’s Dominion” is a very good album in its own right and certainly worth a listen if melodic black/death is your thing.