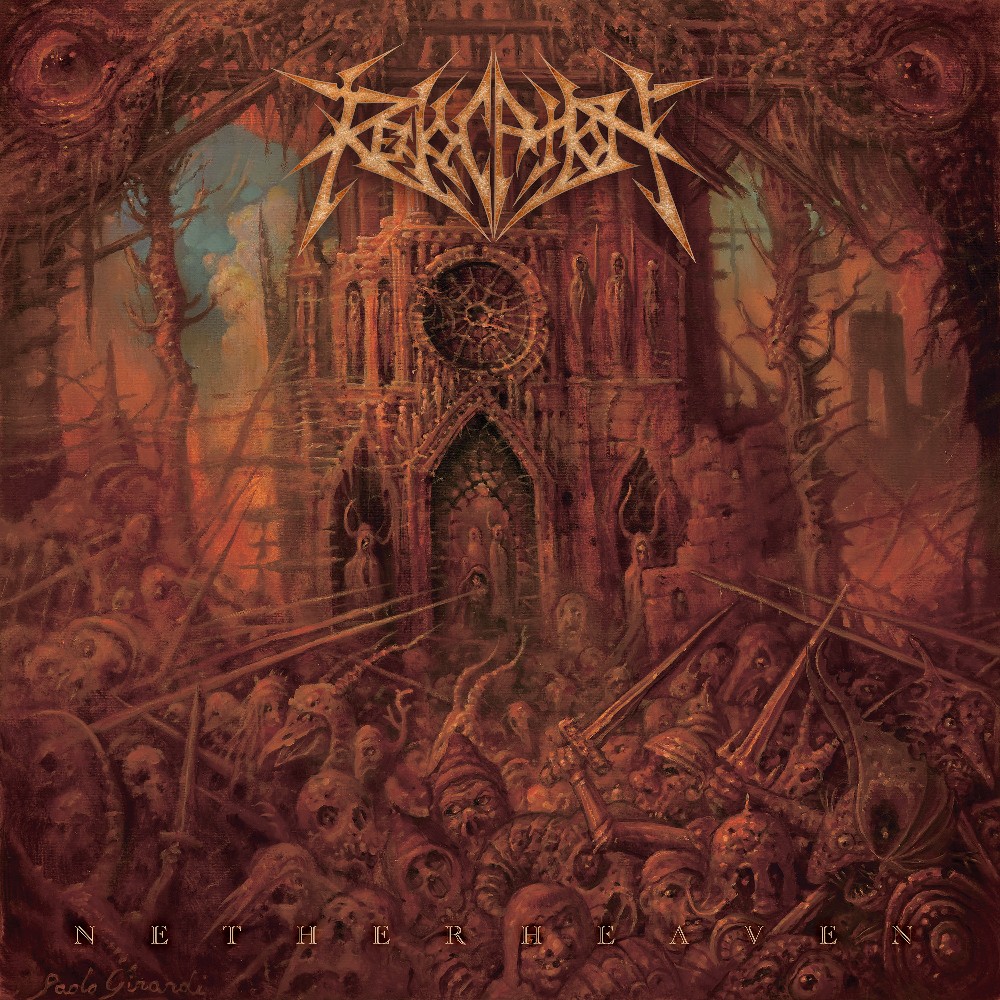 It’s no secret (or is it?) that the Bostonian progressive deathrashers Revocation have been one of my favorite modern bands since the first time I heard their follow-up to their debut (“Empire Of The Obscene”²⁰⁰⁸ which had started it all, unless you count the year of Cryptic Warning ‘2005-2006’ and the “Sanity’s Aberration”²⁰⁰⁵ album), namely, “Existence Is Futile”²⁰⁰⁹, and I wasn’t the only one raving about these guys who had seemingly come out of nowhere. It’s a credit to the band’s frontman and the very soul of the act, the guitarist extraordinaire David Davidson that Revocation followed with a totally different “Chaos Of Forms”²⁰¹¹ (and the subsequent free Scion EP “Teratogenesis”²⁰¹²) and then a 1,2 punch “Revocation”²⁰¹³ and “Deathless”²⁰¹⁴ which continued to explore their progressive side. They were poised to issue a masterpiece of Death’s “Symbolic” proportions which “Great Is Our Sin”²⁰¹⁶ came close to, but, instead gave way to one, their greatest work to date, “The Outer Ones”²⁰¹⁸, an album of such power, depth and finesse that, as I predicted later in my review, it was one that Revocation themselves would have a hard time topping. And call it I did for, while “Netherheaven”, released 4 years later (a gap understandable for anyone who hasn’t taken a nap for the past 2 years) is still a very good album in its own right and worthy of its brand, it does not quite hold the candle to its perfect predecessor.

Perhaps part of the problem is that the magnifiscent guitar duo Davidson-Dan Gargiulo (guitars, backing vocals) is now a solo, that is, Davidson has been Revocation’s single guitarist since 2020 when Gargiulo left. Whether the latter wrote any material on “Netherheaven” or not, it is generally a step down in songwriting even if, from the technical and executive side Davidson solo guitar is not a problem at all, what with those huge epic apocalyptic Obscuraic-Alkaloidian riffs, Revocation actually sounding more powerful and more brutal than ever before and that goes also for Dawidson’s Niel Adam’s-like (Prostitute Disfigurement) vicious vocals and growls. Davidson still comes up with amazing baobab-like with Straussian lead-laden compositions such as the two perfect tracks: “Galleries Of Morbid Artistry” and the personal favorite and longest on the record “The Intervening Abyss Of Untold Aeons” just as he can write perfect instrumentals (The 9th Chasm), but there are fewer of those, most being precise attacks often bereft of a chorus proper, such as “Lessons in Occult Theft” (but check out that earsplitting riff for the verse), “Godforsaken” or the short, concise tease that is the closer “Re-crucified” featuring The Black Dahlia Murder’s Trevor Strnad (R.I.P. 2022) and Morbid Angel’s/Cannibal Corpse’s George “Corpsegrinder” Fisher whose powerful guttural roar tears through the eardrums like a drill reproduced at a high fidelity stereo at the highest volume. That guy has a bottomless throat! Even the very excellent tracks such as the early Triviumish “Strange And Eternal” and the ferocious opener “Diabolical Majesty” seem to be missing something I can’t quite put my finger on and which, nevertheless, won’t let me give them a perfect score. But, as I said, Davidson solo is just part of the perceived problem.

The other problem could be the concept hinted at on the predecessor where mankind betrayed God (Luciferous) and chose the Devil. “Netherworld”, Davidson inspired by both his Roman Catholic upbringing and Durante di Alighiero degli Alighieri better known simply as Dante Alighieri and his “Divine Comedy” which had helped codify much of Roman Catholiscism. Put it another way, Davidson is like me in matters of religion: mad as hell at it and can’t take it anymore. It’s no secret that many Christians, be they Catholic or Protestant, are colossal hypocrites and as such they are in no position whatsoever to impose their theocratic beliefs and rule on others who don’t think like them, especially, since God never expressly gave Christians the right or mandate to do so in any place of the New Testament but rather asked them to wait for Jesus Christ’s return who alone can and will impose righteous theocracy on the world. Davidson paints a picture of a rebel who, sickened with these so called Christians and equating them with God and light per his upbringing, runs the left hand path straight into the arms of God’s Adversary, the Devil called Satan, a picture very vividly painted in the aptly black metallic “Diabolical Majesty” which opens the proceedings. While the rebel clearly has misgivings about his decision he’d rather do that than serve the Christian Right and their gods, that is, the right-wing politicians and their Christofascist following which, although predating the events of past 2 years, is associated with the former U.S. president and his January 6, 2021 insurrection he had inspired and nearly led over false claims of a rigged and stolen election. This is actually named as an inspiration for this album by Davidson on Revocation’s website, an inspiration likely evident in God Forbid-tinged “Nihilistic Violence” which seems to allude to the aforementioned insurrection. But Dawidson wouldn’t be Dawidson without a twist even in his own concept as the rebels fall pray to powers they don’t comprehend (Lessons in Occult Theft) or get kidnapped by them and taken into another dimension never to be seen again (Strange And Eternal) but eventually ending up “Re-crucified” in “The 9th Chasm” for, ahem, eternal terror (Andrea, I owe you a coke, I know). However, despite the concept being multidimensional and multifaceted, I feel that, to use Biblical vernacular, the zeal for Revocation house seemed to have devoured the “Netherheaven” a little bit and it’s reflected in the songwriting which isn’t as consistently fantastic as on “The Outer Ones”.

Far be it from me, though, to suggest that Revocation, that Davidson, who is just as much this band as Dave Mustaine is Megadeth, Matt Heafy Trivium or Chuck Schuldiner was Death (all of which are resounding echoes on this album) yet is now facing an enormous task to maintain Revocation, Inc in impeccable condition, is running short of new ideas or quality. After all, Brett Bamberger (bass) and Ashley Richard Pearson (drums) are an invaluable part of this terrifying and terrific machine which is evident to anyone who listens to this album even once. It’s by far the best produced Revocation record to date. For these reasons, though I am a tad comparatively disappoined with this effort, I think that Revocation will continue to grow, expand and experiment which will result in magnifiscent works like “The Outer Ones”, or even, dare we dream, overshadow them? Just a final piece of advice to David Davidson: dude, you’re great but get a second guitarist for the next album.

OAK – The Quiet Rebellion of Compromise