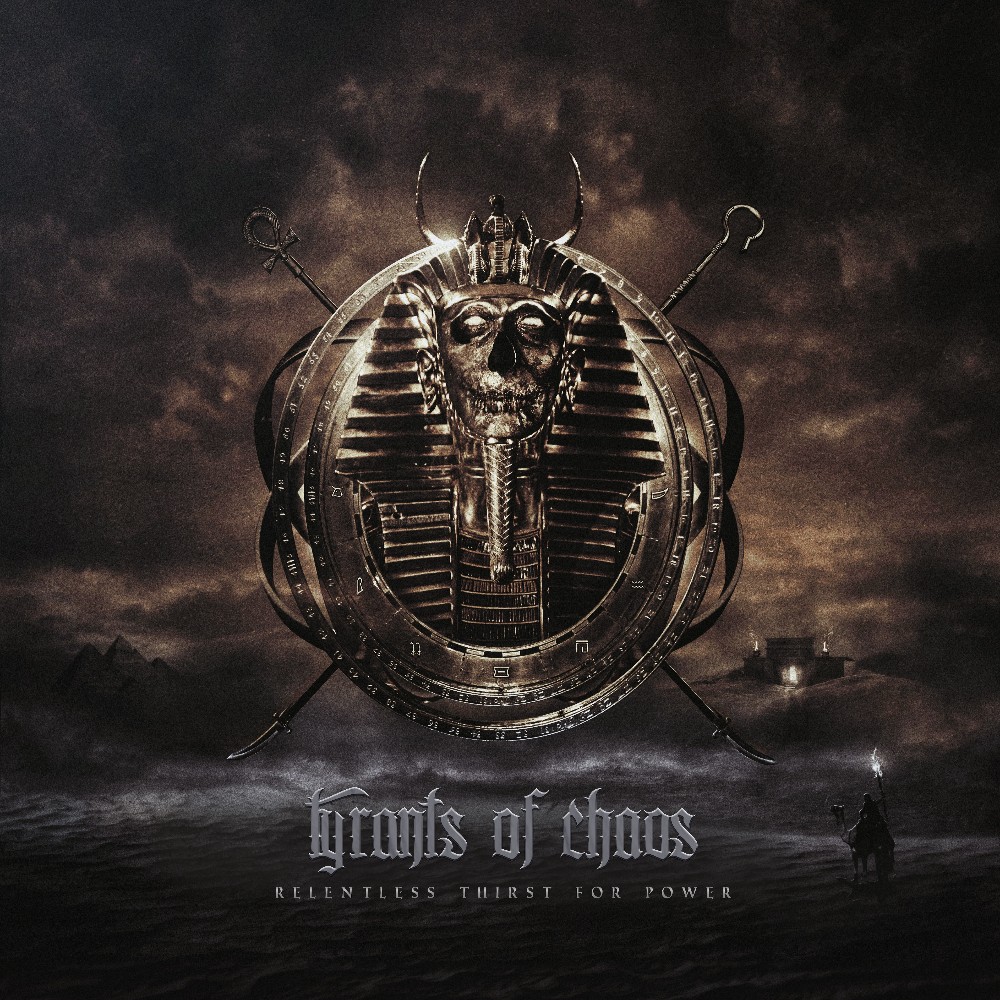 Some say that in the constant pursuit of reinventing itself heavy metal is losing its roots. I don’t know if there’s any truth to that but I do know that it’s cool to listen to just a bare bones no frills heavy metal record akin to old Iron Maiden or Mercyful Fate. This is the spot the Canadian thrashy heavy metallers Tyrants Of Chaos (formerly Rawk Fist) hit with their third album “Relentless Thirst For Power” released earlier this year. Although the album is not a traditional heavy metal record through and through, as influences range from traditional through thrash to groove and power metal, it is true to traditional heavy metal in one regard: very memorable, powerful pillar riffs that remind you of songs like Mercyful Fate’s “Evil” or Judas Priest’s “Breaking The Law”, the sort of riffs that have a classic feeling. “Relentless Thirst For Power”, the band’s third offering after “The Calm Before The Storm”²⁰¹⁶ and this year’s (!) “…into Oblivion” are riddled with them more that Sonny Corleone with bullets in the Francis Ford Coppola’s motion picture “Godfather”.

The opening T.O.C (presumbly acronym for the band’s name) made me think I’d accidentally put on a Manowar YouTube channel (I listen and review on my phone) what “with metal we’ll set the world on fire” but they actually come really come close to doing just that on the subsequent “The Black Gap” that has both “classic” and Megadeth’s “Hangar 18” written all over it, likely as a tribute since this is not the only Megadeth reference. In any case, the track puts their songwriting prowess fully on display and is a perfect segue into the Anthraxian death metal-flavored crossover of “Mourning Sickness”. “The “Dreaming Neon Black” Nevermorish “Slay the Hostages”, with its Panteric culmination is another highlight and, frankly, the third Nevermore album can serve as the best description of this album’s production: rough, raw and with a live thrash feel to it. The New World Order-themed and spoken word “Nightmare Machine” calls to “expose the man behind the curtain” seemingly idiomatic for the Antichrist as many allege we live in the end times and ToC “hope and pray” as if their sentiments agreed with the Book of Revelation, while musically strongly recalling God Forbid’s “Perfect Lie” as well as “IV: Constitution Of Treason” with a notable clean-sung very melodic almost virtuosic epic chorus, for another favorite. Needless to say, Phil Sirias (vocals), Curtiss Vaselenak (guitars), Ryan Dyck (drums), Arik Wagner (2022-guitars) and Sean Simpson (2022-bass) slash and thrash as if this was the first or the last album of their career with the Vaselenak-Wagner dual guitar attacks not unlike Mustaine-Friedman of yore.

While there are no fillers to speak of (yes, even the opener is cool though I’m not a big Manowar fan) two songs kind of breeze by without too much interest on my part: “Red Rage” (the video single) and “Indoctri-Nation” (Krisiun much?). The former is a tribute to the Scottish rebel William “Braveheart” Wallace and brings a touch of the 2000s metalcore, bands like Beyond The Embrace (R.I.P.), and the latter, perhaps losing out for coming right after the excellent “Nightmare Machine”, has a hair metal beginning and a Judas Priestly melodiscism to it, as the words “I ask myself if there’s a god” imply either that the protagonist is not always the same or his ambivalence, but the excellent solo which is borderline Megadeth enhances an otherwise solid but unremarkable track.

Tyrant Of Chaos’ third offering “Relentless Thirst For Power” could have been better but is still a very good album worthy of being called a tribute to heavy metal it lays a claim to being, plus it’s something to be said for a band who releases two heavy metal albums in the same year given our current world situation. It’s a record both the band and their tireless promoter Jon Asher from the Asher Media Relations can be proud of.

OAK – The Quiet Rebellion of Compromise