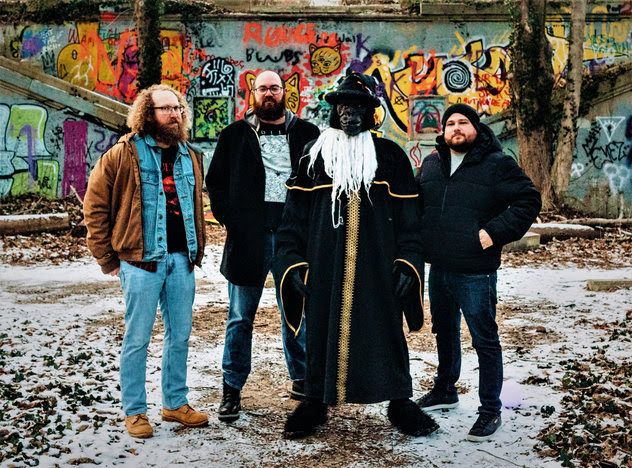 Learning that 10,000 years ago, a gorilla ate a space banana and gained magical powers, only to start a metal band 9,997 years later was a well worth piece of information when discovering the New York based sludge act and their fine and heavy grooves. Below there’s a bit more info about the band, Bertrum, primates and wizardry. A fun lecture to brighten your day and a cool soundtrack for when you need one.

Introduce your band, and describe your latest release:
We are Gorilla Wizard. A big hairy sludgy foursome of gooey metal goodness fronted by a curly haired metal maniac that features a primate prognosticator on guitar, a bassist with thunder in his fingertips, and a drummer with the calves of a Greek god. We deliver only the finest cut heavy grooves slathered in the ooiest of gooiest of riffs.

Our latest release is the single: At War With Our Past Selves – off our upcoming EP White Knuckle/Black Magic. To those fortunate enough to be familiar with our now cult classic Tales from the Cauldron, you’ll love the vibe as we’ve taken the formula and turned the intensity to 11 with big riffs, fast grooves, and monstrous melodies.

What’s the hardest part about being a band in this day and age?
Social media. It’s dumb. We generally prefer using astral projections to deliver our heavy metal maladies. But, since most people don’t subscribe to any kind of celestial streaming service, we have to post memes and garbage on TikTok instead.

When did you realise that your project had the potential to be much more than just a fun idea?
Bertrum has generally always been an interesting fellow. The rest of the band have always wanted to make killer metal, but being captured by Bertrum was probably the band’s greatest blessing. Sure Gaben and Mikal also are part of the immensely heavy Kaiju Daisenso, but being forced to write around a 10,000 year old gorilla’s songs really kicked things into high gear. Things got a lot more interesting once Gaben actually started writing down Bertrum’s cauldron story projections. Now the band tells stories from Bertrum’s 10,000 years on earth and beyond.

Tell us about your latest release, why should we check it out?
Fancy a bowl full of gigantic riffs? How bout some cataclysmic bass and jackhammer drums? What about a touch dreary dread? Well then the upcoming release White Knuckle/Black Magic is what you crave. We’re really excited to finally deliver these five fine tunes to your ear holes. In less than 30 minutes WKBM promises to take you on a journey of peaks and valleys of intense heart pounding aggression, dark moody sludge, and everything in-between.

How does a song typically come together for you?
Bertrum has 1,274,765 different riffs he’s conjured over the last 10,000 years. Of those, he’s whittled it down to about 200 or so that he and Mikal are working on. Of those 200, Gaben turns down about 185 and says “Trim the fat, make the release have a flow” and work starts. The whole band starts chopping and picking apart each guitar structure Bertrum lays out and turns the whole thing into a magnificent story. Sometimes it requires days of toil, other times they strike gold in one playthrough. Once the process of massaging is complete, Mikal pumps out the final drums, Gaben consults the ol cauldron storybook for inspiration, and Ry churns out the bottom end. They send it to get mixed, second guess themselves 1000 times, then finally master it. Shortly after, Ry says “I have a great idea for a video.” and out pops a glorious visual masterpiece.

How would you describe your sound to an unfamiliar reader?
Big, loud, hairy grooves. We take influence from all kinds of music and try to incorporate it into our fatal formula. Everything from Entombed and Type O Negative, to Alice and Chains and Gregorian chants. We take all the musics, throw them into a big bubbling cauldron, mix it around, and out pops the delectable heavy grooves you hear.

What do you want listeners to take away from listening to your band?
Metal is ridiculous. Embrace it. After you enjoy some tubular tunes, stick around and dig into the outlandish lore. Bertrum has a lot of stories to tell.

Where would you really like to tour that you haven’t done so yet, and why?
We’d really love to tour Orion’s Belt, we hear it’s really nice this time of millennia. We’d love to engage in more intergalactic travel, but sailing along celestial planes make Bertrum pretty tired, and when Bertrum is tired he gets cranky. And when he’s cranky he gets gassy. And Bertrum’s gas can clear Citi Field. (Not hard to do, cause the Mets can barely fill it)

How would you say that the sound of your band has progressed over the years?
Bertrum originally started making music on the bullroarer to ward off evil spirits. Since then, he’s come a long way and really fell in love with distortion. Bertrum soon realized that 6 strings really weren’t enough to capture the raw darkness he wanted to convey. Since Tales the band has decided to take their formula and lean more into death and thrash metal. Expect the next LP to have a much thrashier vibe.

How excited are you for 2022, and what can fans expect from you?
2022 was a good year, and it’s about to get even better with our new video for Trashmaster. Ry pulled all the stops and helped create something truly magical and unique. Expect a lot more from the band in 2023. They have a split with the mighty Titanosaur planned, a novella telling Bertrum’s origins, and we should see the start of one of the epic battles with Bertrum’s nemesis.