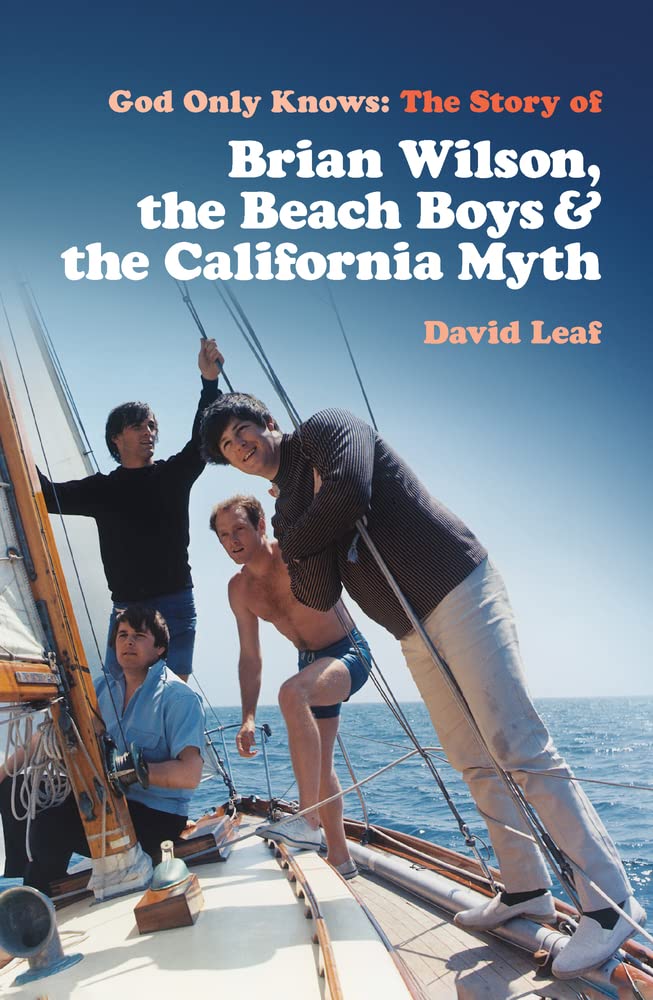 DAVID LEAF – God Only Knows: The Story of Brian Wilson, the Beach Boys & the California Myth

This legendary and outright essential book on Brian Wilson and the Beach Boys, which originally saw the light of day back in 1978, was extensively updated by author David Leaf quite recently and then published by the ever-reliable purveyors of quality literature, namely Omnibus Press. What we have here is not only a groundbreaking and thorough discussion of arguably the most important US band of all time but also an enthralling and borderline poetic story of a musical genius whose journey in life simply defies belief. I am of course referring to the inimitable Brian Wilson, and as the author states in the chapters that were composed in 2022, a more appropriate title of the book would have been Brian Wilson of the Beach Boys as the narrative very much revolves around this brilliant composer. Then again, Brian and the Beach Boys are inextricably linked in so many ways, so the original title is still an apt one from my perspective.

Eloquently written, well-structured, and told with warmth and affection for the subject matter, God Only Knows is as memorable as it is inspired. Is it a survivor’s tale? Well, it is about greatness and tragedy, deep-seated pain and profound love, trauma and redemption, family ties and fragile friendships, and perhaps more than anything else, it is about unwavering hope. Leaf is fairly balanced with respect to the seemingly endless feud between Brian and the other members of the group, and if the text occasionally feels slightly one-sided, it is because Wilson is the focal point of the chronicle. Does the book ever come across as somewhat melodramatic? Of course! How could it not be considering the turbulent and downright chaotic history of the band and its main protagonist? There was an abundance of drama back in the 60s and 70s – the crushing weight and burden of the Wilson brothers’ relationship with their father and one-time manager Murry being but one example.

Providing the reader with a comprehensive and in-depth study of the first two decades of the Beach Boys’ existence and their discography is obviously a huge plus, but it also paints a vivid portrait of the wildly skilled ensemble and how they functioned (and oftentimes failed to function) as a collective entity on and off stage, the creative tug of war between Brian and Mike Love, and how the collapsed SMiLE project in 1967 affected them (and in particular its mastermind, Brian). Actually, the chapters detailing the trials and tribulations of 1966 and 1967 were almost painful to read as were the ones that focus on the dark years when Brian was under the menacing spell of Dr. Landy.

Underneath its many layers, God Only knows is about dreams and visions, of longing for something beautiful in life that might not always be easily attainable or tangible, but which is nevertheless out there somewhere and worth striving for. The California myth and the surreal yet irresistible image of fun in the sun, surfing, sandy beaches, hot cars, and even hotter girls, that the Beach Boys evoked in the minds of their fans and listeners in back then remains an uplifting thing even to this day. The actual state of California may not have corresponded to what Wilson and his talented cohorts translated into sound, but as the author points out, they wrote songs containing heavenly melodies that mattered to people and made them feel. They essentially blurred the lines between fantasy and reality. From Leaf’s first encounters with the band all those decades ago and up until the present day where he has worked extensively with Brian on various projects, he never fails to highlight the timeless quality of the Beach Boys’ tunes (and the solo offerings by the Wilson brothers for that matter) and how they inspired people to dream. Apart from his own dealings, experiences, and interactions with Brian and the Beach Boys over the years, countless people close to the ensemble were interviewed for the book, which adds depth and substance to Leaf’s account. Reality truly is stranger than fiction sometimes, and both the negatives and positives are outlined throughout its 469 pages.

God Only Knows is important for so many reasons, and believe me when I say that it lends itself perfectly to careful reading as there is a lot to absorb and digest here. If you want inside information, this is the one to get, and I strongly recommend that you invest your precious time in this one and then afterwards devour the two autobiographies by Brian Wilson and Mike Love, namely I am Brian Wilson and Good Vibrations: My Life as a Beach Boy.