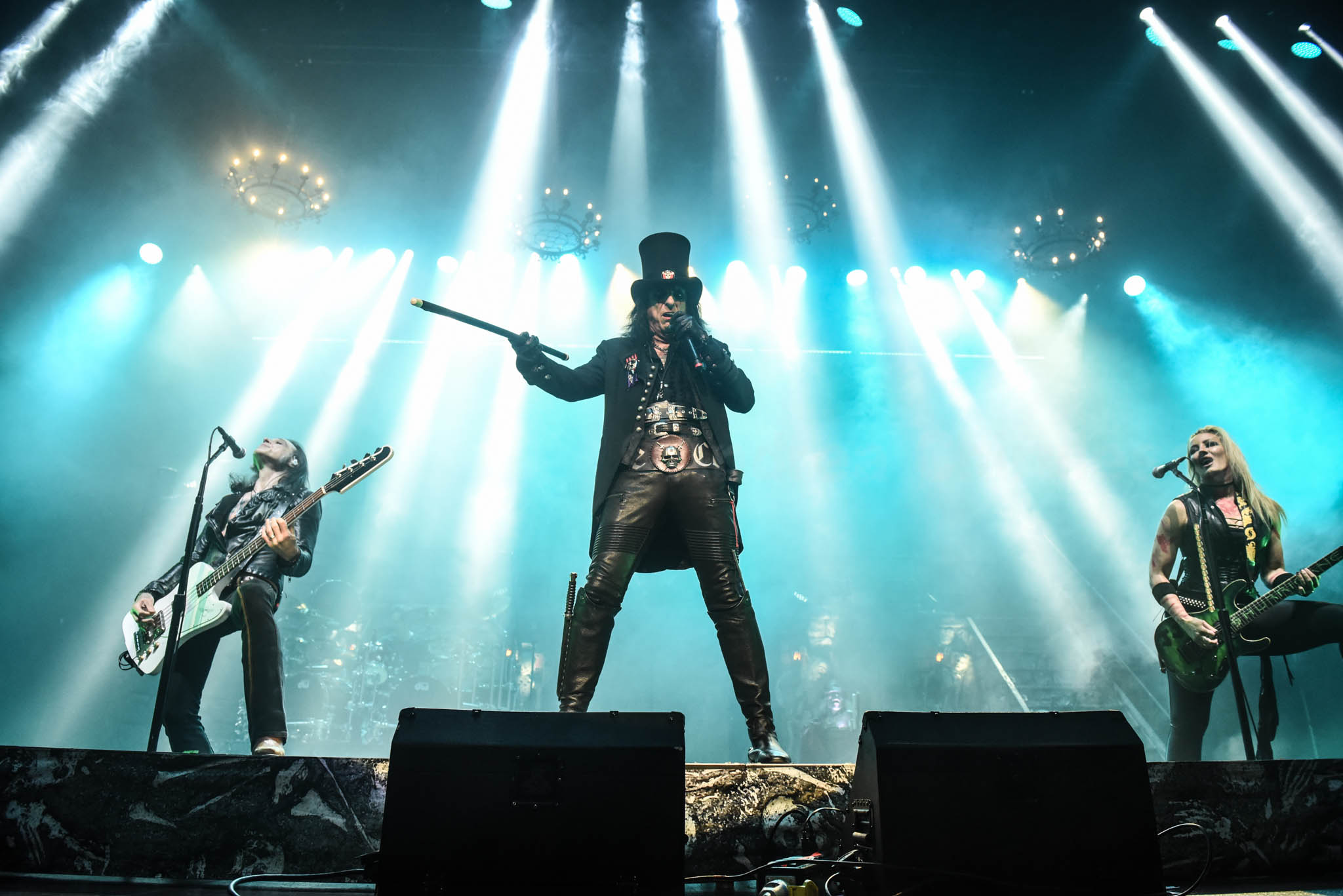 It was a bit of a surprise to head that Live Nation is organizing a concert with Alice Cooper at Spektrum, which is a venue with very high capacity and not that the might Aice Cooper doesn’t deserve a sold out stadium, but it feels like there’s not enough people willing to attend the nightmareish show live. However, I think it was one of the show where I have seen most white or grey colored hair in the audience, but to my (other) surprise I have seen enough teenagers dressed in a gothic manner and with some of the famous outfits from Copper’s career. Bute it was soon clear why they chose Spektrum: the stage show. It required a complex construction on stage, a certain depth so that the stairs, the chandeliers, the big Frankenstein and other items could be stored or set up to come on stage. Heck, even storing the gianormous balloons required extra space. So I guess that’s why Live Nation chose this venue, and closed the sides of the venue so that people would only stand/sit in front of it.

The opening act for this tour were the Aussies in Airbourne, who, despite their contagious good mood and attempts at joking with the crowd, barely got a reaction or two from the static Norwegian crowd. I think the highest yell was when they praised the crew and technicians who spend their whole day setting up and then rigging down the stage. But I am sure they scored some extra points when they encouraged big people to lift the smaller ones on their shoulders, while throwing (full) beer glasses at them and caused mini heart attacks among the security guys, who tend to not allow an increased manifestation of joy at concerts. Which is good on one hand and sad on another. Anyway, this is not the main subject of the evening.

Airbourne are like 4 bunnies making commercials for long lasting batteries, and the singer is in his own league. He always runs around, jumps, holds speeches between songs, does his magic trick by climbing on the shoulders of a crew members and plays the guitar while he gets carried around through the crowd, then stop and smashes a can of beer on his head, then back on stage. He’s really fun to watch, they should have deserved more ovations. I bet that this evening will be remembered by how the guitar battery failed him when he had a big moment of a starting solo for ‘Live it Up’ (I think), but prior to the solo, someone manually rang a siren on stage and Joel was supposed to do his guitar tricks right after. Instead it all went silent and a technician had to run to him with a new guitar. So very well that he had a cheer and a thanks to all those talented people who work backstage and make sure the live event goes on as smoothly as possible.

It was a pity we couldn’t photograph the Australians and get a glimpse of their energetic show and the bare chested guitarists. I would have photographed them with clothes on too, but I don’t think they usually bother with covering their top half of the body. So during the grand finale of ‘Running Wild’, I left to go to the photographers’ meeting point for the evening.

As another nice surprise, we were allowed four songs in the photopit, and not just the usual three. Which is absolutely amazing given the fact that an Alice Cooper show has so much to offer every second, all from the insane and nightmareish stage setup to the lovely work of the 4 guitarists. I would have loved to capture the drummer too, but my height and his distance from the stage’s end weren’t helpful with that.

I have had the chance to see Alice Cooper several times before, but I think it was always at festivals so that meant he only got to play classic hits only. Which are the ones that get the crowd going and that are accompanied by some of the coolest stage shows. Like, the masked man during ‘The Man Behind th Mask’, who comes around to try to cut someone’s throat, the big fat baby during ‘Million Dollar Baby’. But we were now remembered that there’s more to his music than Poison and School’s out and so ‘new’ songs made their way through the playlist. ‘Roses on White Lace’ had a nice apparition from his wife, who did a sweet dance that ended with the two of them kissing on top of the stairs. That was a touching moment.

And after that, the coming songs were filled with a variety of awesome solos, either guitars/bass, drums or a mix of the two. Even if Nita Strauss is probably a favorite of many who attend the concert, given her always good mood and energy combined with skillfull guitar playing and really hot ways of performing and doing tricks with her guitars, each of the 4 guitarists (3 on guitar and one on bass) had their chance at ‘showing off’. And at times they did it all together while gathering in the middle of the stage. It just fills your brain with tons of impressions that you barely have time to digest until the next cool moment happens.

There was a the classic guillotine and the ‘cut Alice’s head’ act, but this time it was performed during Dead Babies and followed by a well placed ‘I love the dead’. I told my colleagues the next day that Alice Cooper’s concert is the only place where you can scream ‘I love the dead’ from the top of your lungs and people around you would smile. Sadly, my voice didn’t like the screaming part and it deserted me to the level that it’s still gone 4 days after the show.

But even if voiceless, I’m still filled with the good energy of a properly directed show and a happy crowd who witnessed a childhood hero live. I still don’t think I managed to notice each detail of the stage, each nightmare creature that was placed there and that might have made a certain move during a part of a song. However, it’s ok. The spell of a bombastic performance, a 74 year old man who still delivers and is up for such an intense show, surrounded by an amazing drummer, 4 guitarists, a seldom appearance of a lovely wife and various puppets, that spell is going strong. I’d gladly loose my voice once again right now if I was given the chance to watch this performance live tonight.